If you followed the Copper & Blue Twitter feed, you've seen astonishment in reaction to various Pittsburgh sports writers' narratives during the Flyers series. Those sports writers (and the CBC panel) have laid blame on everyone and everything except Marc-Andre Fleury. Even in the face of Fleury's all-time awful playoff performance (worst save percentage in 12 years), sports writers blamed the defense, Evgeni Malkin, Sidney Crosby, Dan Bylsma and Dan Bylsma's system. Pittsburgh fans followed suit.

Fleury's playoff career is marked by well-below-average results - only once, in 2007-08, has Fleury been better than .910 in total save percentage and .920 even-strength save percentage. The "best big game goalie in hockey" is just bad in the playoffs. What other "big games" are there? 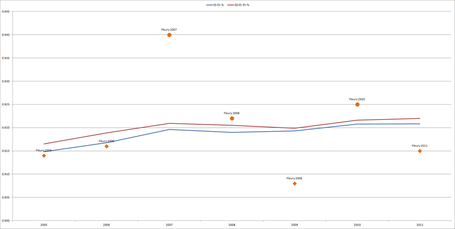 Over the last two seasons, Fleury's combined even strength save percentage is .9201, compare that to the league average of .9208 or league average for qualifying seasons over the same time span - .9218. Fleury is below average over this time.

Over the last two seasons, 37 goaltenders have two qualifying seasons - Fleury ranks 27th in even strength save percentage.

Marc-Andre Fleury once won a Stanley Cup playing behind a juggernaut. For that, he has a reputation he does not deserve.