Is Devan Dubnyk The Answer In Goal For The Oilers?

Share All sharing options for: Is Devan Dubnyk The Answer In Goal For The Oilers?

You know, when I talked to Nik in his post season exit meetings, he told me he wants to play another four or five years. I said ‘You feel that good Nik?’ and he said ‘Well why not?’ So, by him saying that to me, he’s still feeling the compete and the challenge. I think guys like Nik Khabibulin need to be, or like to be, challenged or motivated, they’re not afraid of it. So Devan’s poised right now to take games from him and I love the fact his plan is to get the net back.

--Steve Tambellini, on Nikolai Khabibulin in his end of the year press conference.

"We’ll have Nik back." Tambellini was firm when he answered questions about his veteran goaltender and keystone free agent signing. In that same article, Jonathan Willis points out:

Dubnyk’s career save percentage in the NHL is 0.910, which is right around the league average and compares favourably to guys like Marc-Andre Fleury (0.912) and Martin Brodeur (0.910) in the same span.

Dubnyk's career save percentage is .910, but over the last two seasons, Dubnyk's been above average (save for trouble on the penalty kill, which is difficult to analyze due to small sample sizes) but has been especially good at even strength.

The chart below shows the Oilers' even strength save percentage versus the league average over the last six seasons. 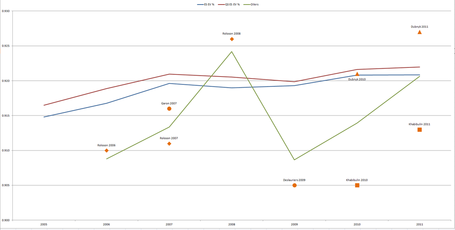 Dubnyk's combined two-season even strength save percentage is .9241, compare that to the league average for qualifying seasons over the same time span - .9218. Dubnyk is well clear of average and well clear of any other goaltender the Oilers have had since Tommy Salo's 1999-2002 seasons.

Over the last two seasons, 37 goaltenders have two qualifying seasons - Dubnyk ranks 15th in even strength save percentage, Nikolai Khabibulin ranks 37th. Mathieu Garon's performance as an Oiler was significantly better than Nikolai Khabibulin. "We’ll have Nik back."

Include all qualifying seasons over that period and 55 goaltenders make the list. Dubnyk ranks 19th, Khabibulin ranks 46th. "We’ll have Nik back."

So while Oilers' fans ask for a Corey Schneider or Michal Neuvirth trade, the problem isn't that the Oilers don't have a capable starter. The problem in Edmonton is that the backup is awful. If replacement-level save percentage is .9078, what does it say about a team that's paid a guy $7.5 million for a .8989 save percentage?