NHL Average Save Percentages Still On The Rise

Share All sharing options for: NHL Average Save Percentages Still On The Rise

"Tyler Bunz is the third-best goalie in the WHL, just wait on him."

"America is a goalie factory!"

"Finland is a goalie factory!"

The playoffs turn the average fan into a goalie-crazed wreck, reminiscent of a certain group of fans from the 1960s. And why not? After all, an average goalie on a hot streak can run his 88 point team deep into the playoffs and an average goalie with myopia can make an average opponent look like the 1986 Edmonton Oilers.

Take heart, Oilers fans and those of you pining for someone else's goaltender: goaltenders in general are getting better.

The next table contains the numbers from qualifying goalies only:

Even strength save percentages from above charts are presented in graph form below. The blue line represents all goalies, the red line is the average for qualifying goaltenders only. Click to enlarge the chart. 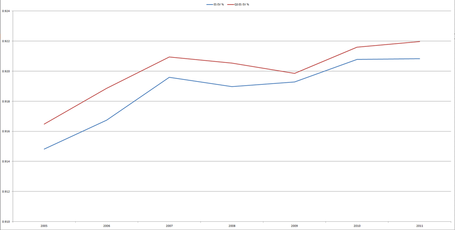 Note the distinct upward trend in both lines. Regular goaltenders have increased their save percentage at even strength from .9165 to .9220 in seven years. Their overall save percentage has increased from .9030 to .9103 over the same time period.