Who Deserves the Calder Trophy? A Comparison of Forwards

Share All sharing options for: Who Deserves the Calder Trophy? A Comparison of Forwards

The Calder Trophy Finalists were named today, as the PHWA selected Ryan Nugent-Hopkins, Gabriel Landeskog and Adam Henrique as the top three rookies in the NHL. A number of very talented rookies, Carl Hagelin, Matt Read, and Justin Faulk, among them, were left off of the final ballot. The three finalists were also the three rookie forwards who accumulated the most points during the 2011-12 season.

The Calder Memorial Trophy is an annual award given to the player selected as the most proficient in his first year of competition in the National Hockey League. The winner is selected in a poll of the Professional Hockey Writers' Association at the end of the regular season and each individual voter ranks their top five candidates on a 10-7-5-3-1 points system. Three finalists are named and the trophy is awarded at the NHL Awards ceremony after the playoffs.

After the jump, I've prepared yet another bubble graph, displaying all rookie forwards with 40 or more games played.

The horizontal axis shows qualcomp, specifically Corsi relative quality of competition taken from the venerable and terrifying Gabriel Desjardins' behindthenet.ca. The vertical axis shows zonestart-adjusted Corsi again from the venerable and terrifying one. The bubbles are scaled to indicate points per game. All of the caveats about comparing these numbers between teams stand, but the chart is still a useful jumping-off point for analysis and discussion. 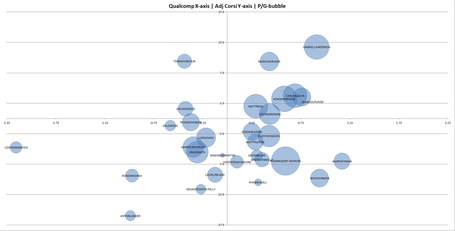 Take a moment to digest this information. After doing so, list your top three rookie forwards in the comments below. I'll look at rookie defensemen in the coming days.