Don Waddell booked his spot in the finals with a narrow victory over the tournament's fourth seed, Scott Howson. It was the second consecutive time that Waddell advanced earning less than 60% of the vote. Today, he meets Doug MacLean in the Not-So-Sweet Sixteen finals, a man who has been dominant in victory in each of his previous three matches.

Those of you with long memories will recall that I actually voted against Waddell in one of those close matches. Even still, I think Waddell should win this one, and I'll explain why after the jump.

Why Waddell Should Win

Don Waddell deserves to win this one because his post-lockout sins are far more numerous than those of his opponent. In this tournament, Waddell is actually a victim of his success. The Thrashers were far from perfect at the draft table, but Waddell still went into the lockout with a young core of Ilya Kovalchuk, Dany Heatley, Kari Lehtonen, and Braydon Coburn. That absolutely dwarfs MacLean's group of Rick Nash, Nikolai Zherdev, Pascal Leclaire, and Rostislav Klesla. Waddell also had Marc Savard and Slava Kozlov, which is a substantially better veteran pairing than David Vyborny and Todd Marchant.

When you look at MacLean's team coming out of the lockout, you expect it to fail. It did, and he was fired after just two seasons. Waddell's team looked like it could succeed. There was reason for hope. But, my goodness, did it ever fail big. And instead of moving on quickly, Waddell was around to help in slowly dismantling the team until it finally moved to Winnipeg, staying in the general manager's chair for most of that time. This despite the fact that Waddell basically asked to be fired during the 2007-08 season when after just six games he fired Bob Hartley and made himself the team's head coach.

We've been over the specifics of the dismantling before, but what it comes down to for me is the big picture. We're now seven years (and zero playoff wins) later, and the Thrashers-now-Jets don't look as good for the future as they did in 2005. That's horrific. Doug MacLean was terrible, but he only very rarely moved a piece that would have been useful for the team's future, and once he was gone, the team was able to chart a new course. Don Waddell, by contrast, was one of the main reasons that the Thrashers were terrible for the entire period under examination. Don Waddell deserves to win. 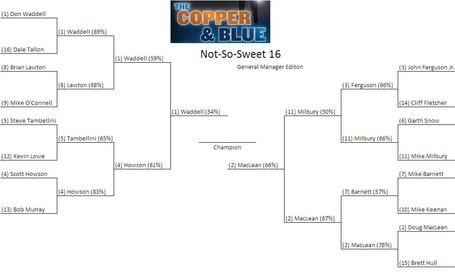