In my last post on the Barons, Permaculture wondered about what might be causing such sharp changes in the team's shot differential. With the Barons being a minor league team, there were plenty of changes to the lineup throughout the season, often with key players being missing for large swaths of time. There's no doubt that these changes were a factor. Something else I thought might be a factor is the team's level of competition at various points during the season.

The chart below shows OKC's shot differential as well as the average year-end goal differential of their opponents, both expressed as a twenty-game average: 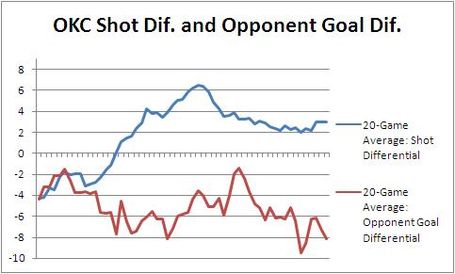 There is, as you would expect, a negative correlation between the two variables. -0.34 isn't nothing, but it's also not particularly strong. In other words, it looks like there's a real impact here, but it's not overwhelming, and other factors are also going to be very significant.

What I did find interesting, however, is just how bad the Barons' opponents were this season. At no point during the season did they have a twenty-game stretch where their opponents had a positive goal differential (on average). On the season, the average Barons' opponent had a goal differential of -5.7, and that's mostly made up of playing more really bad teams than really good teams.