Checking Up on the Barons

Share All sharing options for: Checking Up on the Barons

If you've been reading this site over the last week, you've no doubt become aware that the AHL regular season has come to an end and that the AHL playoffs are set to begin. The Oklahoma City Barons begin as the top seed in the Western Conference by virtue of their superior regular season performance. This came as a huge surprise to me. When I first looked at the team's performance in November, the team's record was strong, but with a shot differential of -4.8 per game and a PDO (in all situations) of 104.4, I thought that they were destined for a crash. Instead, the team's shot differential improved, and the goaltending remained strong enough that Yann Danis was named the league's top goaltender. After the jump, I'll take a closer look at the team's performance on the ice, and of course, (spoiler!) lament their performance at the gate.

As noted, the Barons had an excellent record all year long. On the season as a whole, the Barons averaged 29.1 shots per game and allowed 28.1 shots per game, for a respectable +1.0 shot differential per game, but their shot differential in the first third of the season obscures just how well the team played during the last two thirds of the season. Let's take a look at the team's ten and twenty game averages: 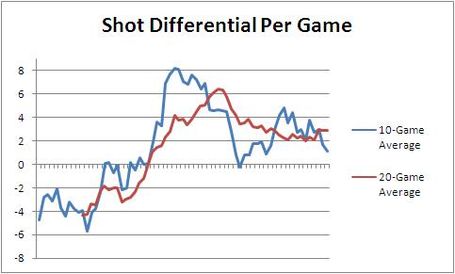 The first point on the chart is the ten-game mark, and at the twenty-game mark, you'll see the second line appear. It's crazy to see the same team have one twenty-game stretch at -4.3 and another twenty-game stretch at +6.5. That's just a massive difference. In terms of looking to the playoffs, it's quite encouraging that even after a decline from their peak, the Barons have been consistently in the positive after getting over their early-season doldrums.

As for the team's attendance... let's take a look at the three-game average: 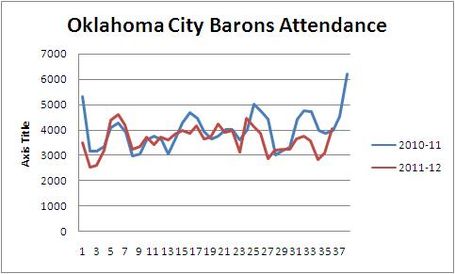 Just brutal. I recognize that Oklahoma City is a tough market, especially since the Barons are trying to change the hockey-consuming culture from "everything is free" (i.e. life with the Blazers) to "people really ought to pay for tickets". So if you're looking for a positive, it's that these numbers do reflect actual buyers.

But there aren't enough of them, and the trend isn't good. The Barons averaged just 3,684 fans per game this season, 26th (out of 30) in the AHL and an 11% decline from last season when they averaged 4,155 fans per game. If you ditch the first and last game of the season, the decline isn't quite as bad (just under 8%), but it's hard to see how this is moving in the right direction. The decline is even more ghastly when you consider the fact that the Barons didn't need to compete with the NBA for the first part of the season, and that the team is winning about as much as you could possibly hope for.

It will be interesting to see what kind of interest the Barons get in the playoffs. Last season, the playoffs were very poorly attended with the Barons averaging just 2,554 fans in their three home playoff games. Will a really good team and (possibly) a longer playoff run help? You'd like to hope so, and if it happens, that would be great news, but I don't think it's overly critical if it doesn't. Will it help them with sales for next season? The future of AHL hockey in Oklahoma City probably depends on it. With attendance falling below 4,000 fans per game, the agreement between the AHL team and the city can be terminated. I'd be very surprised to see that happen this off-season, but if the downward trend in attendance continues for another year, you'd have to think that it would be considered.