Share All sharing options for: Building Your Selke Ballot - The Tough-Minutes Forwards

The Frank J. Selke Trophy is an annual award given to the forward who best excels in the defensive aspects of the game. The winner is selected in a poll of the Professional Hockey Writers' Association at the end of the regular season. Typically, the PHWA goes out of it's way to avoid awarding it to the best defensive forward in the game and turns the Selke into a lifetime achievement award. Not only that, the voters are disproportionately dispersed through the league, so unless the PHWA decides it's time for a lifetime achievement award, there's no chance the finalists are going to be players in small media markets.

It's time to put an end to that.

The horizontal axis shows qualcomp, specifically Corsi relative quality of competition taken from the venerable and terrifying Gabriel Desjardins' behindthenet.ca. The vertical axis shows percentage of percentage of faceoffs taken in the defensive zone, again from the venerable and terrifying one. The bubbles are color-coded: blue means the player in the bubble has a positive zonestart-adjusted Corsi, white a negative. Finally, the size of the bubble indicates absolute value for zonestart-adjusted Corsi. All of the caveats about comparing these numbers between teams stand, but the chart is still a useful jumping-off point for analysis and discussion.

My 14 candidates for the Selke are on the graph below: 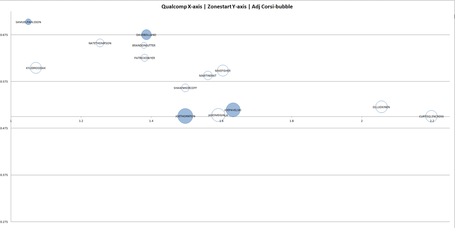 Based on the difficulty of assignment and results on the chart, my three finalists are Dave Bolland, Brandon Sutter and Nate Thompson, with Dave Bolland winning the honors.