Good teams have a tendency to win games definitively. That doesn't come as a surprise, but it's good to know. It's also good to know that because there's almost no correlation from season to season in a team's ability to win one-goal games, a team's record in games decided by two or more goals is often a better indicator of their true level of ability. With empty-netters, going with a strict "win by two" policy probably isn't wise. As such, I've decided that a "clear victory" is any win by two or more goals without including empty-netters. So if you win 3-1 but got the third goal on an empty-netter, I didn't consider that win a "clear victory". If you win 4-1 but got two empty-netters, still doesn't count. We'll take a look at team and division results after the jump. 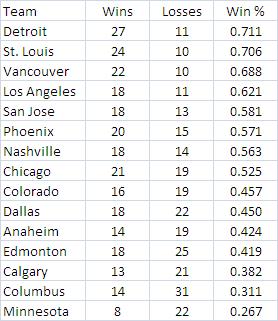 The top eight teams on the chart are the eight playoff teams in the Western Conference, which is a pretty satisfying result. Detroit, St. Louis, and Vancouver look like the class of the Conference, but L.A. is right with them in the loss column, losing by two or more just eleven times all year.

The Oilers improved their goal differential substantially this season, so it doesn't come as a surprise that they'd also improve here. Last year's team was 13-28 in these games (.317) and finished 29th overall. This year saw substantial improvement, which is very encouraging. The Oilers also did better by this measure than Calgary, and that's always fun.

At the bottom of the chart, we see that Columbus isn't in dead last. That honor belongs to the Minnesota Wild who won by two or more just eight times all year. 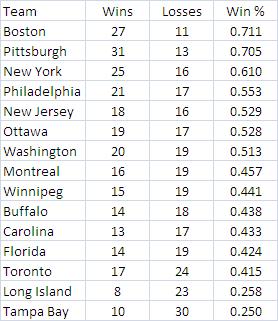 Boston, Pittsburgh, and (to a lesser extent) New York are clearly the class of the Conference. Pittsburgh clearly has the toughest match-up in Philadelphia, and now that they've lost the first game (at home), they probably can't be considered a huge favorite.

New Jersey, on the other hand, got a gift in the Florida Panthers, easily the worst team in the playoffs by this measure, though that last playoff spot was always going to be filled by a laggard. At the bottom of the chart we see the Islanders tied with Minnesota for the least victories with eight, and Tampa Bay bringing up the rear in winning percentage after coming within one win of the Stanley Cup Finals in 2011.

I'll note off the top that this chart only includes games between teams from different divisions in order to exclude the games where a division would get both a win and a loss. With that said, you can really see the difference in quality between the six divisions. One from each Conference is excellent, one is good, and one is terrible with the Western division leading in each case.