Share All sharing options for: NHL Playoff Predictions - First Round

This morning I looked at the outcome of my pre-season predictions, and while they didn't go quite as well as I might have hoped, they're still an awful lot of fun. But the best part about the regular season ending is the start of the playoffs (and an opportunity to watch teams other than the Oilers)! That, of course, means an opportunity for still more predictions. After the jump, I'll take a brief look at each of the first round match-ups using some of my favorite statistics, and make some picks.

The first thing I like to check on is how each of the playoff teams did against other good teams. Were they running up a strong goal differential against also-rans and struggling against playoff teams? It's a useful thing to know. As such, the first table I'll show is the record and goal differential of each team in the Western Conference during regulation time (all games that went into overtime are counted as ties, and for the calculation of Pt%, I gave two points for a win and one for a tie). Here's the chart:

Definitely a few surprises here for me. Remembering a couple of Oiler blowouts, I had expected the Blackhawks to show well, but they certainly don't, and San Jose looks awful. I expected that from Phoenix and Nashville, but they actually hold up quite well. St. Louis is the class of the group, but the Canucks get an awful draw as the top seed for the second year in a row... and I couldn't be happier.

Next, let's take a look at the specific match-ups in the West using a few significant statistical categories (against all teams) as a base. I'll be using Fenwick percentage during five-on-five with the score tied this season, even strength save percentage of the starting goaltender over the last four years (Luongo, Quick, Halak, Niemi, Smith, Crawford, Rinne, and Howard), five-on-four shot differential this season, and four-on-five shot differential this season: 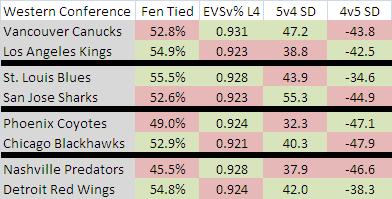 Los Angeles in seven: I admit that I have a strong tendency to pick against the Canucks, so that's probably part of this pick, but the Kings are a legitimately excellent team. They've got a comparable goal differential against good teams to Vancouver, and are better during five-on-five play. There's a big gap in performance between the two starting goalies historically, but I'm not convinced the gap is that large right now. The Kings should also have Jeff Carter back in the lineup for Game One, whereas the Canucks will likely be without Daniel Sedin. This should be a great series.

St. Louis in five: The Sharks have a big advantage on the power play, but the Blues make up for that with a much better PK. The Blues are a very deep team at all positions with an excellent coach who should be able to exploit some of San Jose's lesser lights. The possibility for an upset here isn't helped by the fact that I have much more faith in Jaroslav Halak than I do in Antti Niemi. St. Louis has been the better team all year, and San Jose has struggled against good teams. The Blues should move on.

Chicago in six: Before I started looking into the numbers, I was pretty sure that Chicago should have an easy time on this one, but their record against good teams spooked me. Still, the Hawks are better in most other areas, and the one area of significant strength for Phoenix is supposed to be goaltending. But that's Mike Smith, so I don't really believe it.

Detroit in six: It's amazing how much air you let out of Detroit's tires by taking away their results against the league's worst clubs. The Wings fall from +45 all the way to +3 and come out of with a losing record. My original thinking was that this would be a complete crush, but that does give me pause. The series was always going to be a lot closer than it looks from a glance at the Fenwick percentages with the Predators adding Kostitsyn, Radulov, and Gaustad up front, and I'm now at the point where a Nashville win wouldn't be completely bewildering. Still... that's a huge gap, and I think Detroit will take it.

Now, let's take a look at the Eastern Conference, starting with each team's performance against other playoff teams:

The Capitals look okay here, but they ran up a lot of those wins when Boudreau was around (6-3-2 and +8), so I don't think they're quite as dangerous as this chart makes them look. No match-up of doom like we have in the West with L.A. and Vancouver, but we do see two really bad teams squaring off in New Jersey and Florida. The Panthers are awful, but they got a perfect draw, so... you never know.

Next up, the stats (the goalies are Lundqvist, Anderson, Thomas, Neuvirth, Theodore, Brodeur, Fleury, and Bryzgalov): 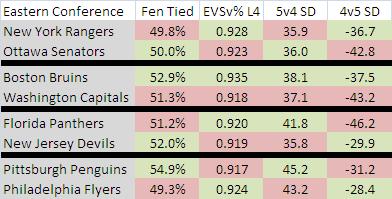 New York in five: Very good against good teams, and the Senators just aren't significantly better in any area. I don't think that New York is the best team in the Eastern Conference, but the Senators don't look capable of taking them out.

Boston in four: As you may have guessed from my earlier comments, I think Dale Hunter is pretty brutal. Add to that the fact that Vokoun is gone and that Neuvirth may be out too, and I don't see the Capitals being much of a challenge for the Bruins. The one thing Washington may have going for it is good depth up front, but Boston has got that too. Should be an easy win for the Bruins.

New Jersey in seven: The battle of the basement. If New Jersey wins, then the Rangers should have a very easy road to the Conference Finals. If Florida wins, it's Boston that gets the gift. I'm taking the Devils here, but not because they look like a good team; Florida just looks bad. -32 against playoff teams is just plain terrible.

Pittsburgh in six: This should be a great series, but I think Philadelphia is outgunned, especially since it looks like Sidney Crosby is healthy. With him, the forward group is just disgusting. The Penguins are one of the best five-on-five teams in the NHL, while Philly is just average. I don't trust Marc-Andre Fleury at all (note that he has the worst even strength save percentage of the sixteen probable starters), but the other parts of the team are just too good to bet against.