As many of you know, I made some predictions about the quality of various teams in the NHL before the season began using goal differential as the main indicator. Now, a common rule of thumb is that six goal differential is worth about one win, so it seems to me that any prediction that ends up within 15 goal differential of the result is pretty darn good, and that anything within 30 is passable. After the jump, I'll share a chart of my predictions compared to the actual results, try to evaluate them using a couple of controls, and take a closer look at the eight predictions that didn't even meet the criterion I set for passable. 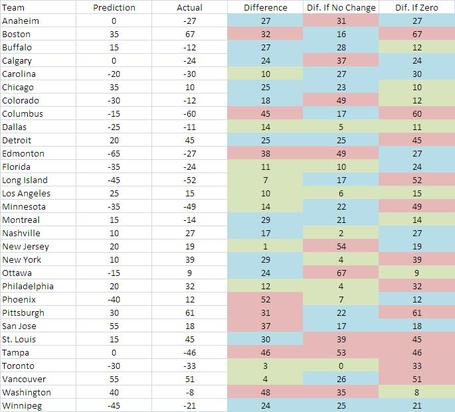 Unfortunately (and hilariously), when the two systems are in basic agreement (within 15 goal differential), the results are actually slightly worse (in 18 cases, I missed by an average of 24.2 goal differential), so that's not going to be much help for me next year. Also amusing: Derek said that he would judge me by my Ottawa prediction. I missed it by 24, the only whole number in the middle of my average and median wrongness.

And what of the bad predictions? Here are a few thoughts on what went wrong for each one:

I correctly thought that the defending Stanley Cup champions would be good, but I didn't figure on them being quite so good. I think that the biggest reason my prediction went up in smoke was the team's 9.4% shooting percentage during five-on-five play, the second best number in the NHL. I generally don't put much stock in shooting percentage, so I have every team pretty close to average in that category. Fact is, that's never how it works out, and I'll get a couple predictions wrong because of that every season. I'm not totally convinced that the team's true quality is closer to the result than my prediction.

Sometimes, everything goes wrong. I thought -15 was a conservative guess, but that's not how it turned out. The goaltending, obviously, wasn't good, but I had that one flagged before the year (although .833 on the PK is more terrible than I was expecting). The biggest issue was coming out of the gate so badly. Between injuries, suspensions, and atrocious goaltending to open the season, this team never got on track. James Wisniewski and Jeff Carter played their first game together on November 12. Going into that game the Jackets were 2-12-1 with a -25 goal differential, their season basically over. The club spent the rest of the year trading away talent and circling the sewer drain.

At least by this measure, the team beat my expectations by a significant margin, and by far the biggest contribution to their improved standing that I hadn't considered was the team's power play. I thought that the team would be in the bottom five in both PP and PK, but in actual fact, they rode improved shot differentials and amazing percentages to one of the best PP conversion rates in the league. Their overall goal differential on special teams was still -1 (the PK didn't do so well), but that's a whole lot better than I thought it would be. It also gives the Oilers a chance to regress next year! Hooray!

This was my worst miss of the year. I thought that losing Eric Belanger and Vernon Fiddler up the middle would hurt them a little, but let's be honest, the real surprise came between the pipes. I think most people agreed that Ilya Bryzgalov >>> Mike Smith before this year began, but Mike Smith's EV Sv% this season was .936, much better than Bryzgalov in Philadelphia, and more to the point in terms of evaluating my prediction, better than Bryzgalov's .931 during 2010-11. Because Jason LaBarbera also had one of his best seasons in 2010-11, the Coyotes had a save percentage of .930 at EV and .873 on the PK in 2010-11. I expected that to drop to something like .916 and .866 this year. In actual fact, the Coyotes posted .931 and .911. So yeah. Big difference.

There were (and are) big questions around Sidney Crosby. The Penguins have just been able to cope better than I ever would have expected. But I guess that's what happens when you underestimate the impact of a guy like Colin McDonald. But seriously, Crosby missed most of this season, and yet the Penguins were actually able to increase their Fenwick percentage with the score tied from 54.0% in 2010-11 to 55.0% this season. I guess it's time to stop thinking that Crosby is the straw stirring the drink. Apparently the Penguins have got three or four, and when one goes down, one of the others can pick up the slack.

Yeah, I've seen the analysis that this team was running through mud, and that's probably the biggest reason that they missed the mark, but they also aren't getting any younger. Their possession numbers declined slightly year over year (five-on-five Fenwick percentage from 53.9% to 52.6% with the score tied), and Thornton, Marleau, Boyle and Murray are all core guys on the wrong side of 30. They saw an uptick from 2009-10 to 2010-11, so it may well be nothing, but this group is definitely running out of time.

I hate this team. Last year, they screwed me by being way better than I expected. Thinking I was so clever by not falling for it and predicting them to be merely mediocre, they screw me by being so bad. I'll talk about this more when I get to the Clear Victories stuff, but the Lightning actually had the worst record in the league in games decided by two or more. Why are the Lightning so bad after being so good after being so bad? It is a riddle wrapped in a mystery inside an enigma and there is no key.

I picked the Capitals as my Stanley Cup favorite, and I know that I wasn't the only one. A division title (and an easy road) should have been a gift, but the Caps whiffed, and will now likely need to march through three very good teams in order to get there. Based on their performance so far this season, that doesn't seem too likely. One reason? The coaching change. Bruce Boudreau seemed like a crazy person on HBO, but the man consistently gets results. I haven't watched a lot of Washington's games, but they haven't been nearly as good with Dale Hunter behind the bench, and I do think some of that is because of the change behind the bench. If Boudreau is there all year, are the Caps one of the best teams in the league? I don't know that I'd go that far. But they'd probably have been better.