Share All sharing options for: The Rebuild Turns Two

I know that there are some among our number who look at this headline, then look at six consecutive years out of the playoffs, and give me the evil eye. And while I don't appreciate the curses, I do understand the sentiment. Including the Oilers, there have only been twenty instances in NHL history where a franchise has missed the playoffs in at least six consecutive seasons. Yet here I am telling you that we're at the beginning of a rebuilding plan, and not only that, but that this rebuilding plan will be orchestrated by the same nincompoops who made a mess of this team in the first place.

But let's be honest. That is in fact the situation. And if you're like me, it doesn't really faze you because for some deep and incomprehensible reason, you're a fan of the Edmonton Oilers, and that's not going to change, whether you agree with the plan or not.

A couple of seasons ago, Kevin Lowe pinned down a timetable of four to six years beginning with the trade deadline prior to drafting Taylor Hall. I took that to mean being in the mix for the playoffs by Year Four and being among the best teams in the Conference by Year Six, and so that's the timeline that I think we should be judging the big picture on. I'll take a closer look at that medium to long term outlook after the jump.

It's pretty clear that if we're looking forward another few years before the Oilers are going to be contending that the most important parts of the team are those players who are under thirty years old right now. The goal for this team should be to build a group of top nine forwards, top four defense, and starting goalie for Years Four to Six that will be excellent. That makes some of Tom Renney's decisions with players like Theo Peckham, Magnus Paajarvi and Linus Omark pretty confusing since all three are players that need to be given plenty of rope this year with the understanding that losing a few extra games because of that isn't such a big deal.

But coaching decisions aside, how are the Oilers doing in terms of accumulating assets?

So how are they doing? In the chart below, we'll look first at the players that I think the Oilers have penciled into those roles going forward:

First off, here's what each color in the chart represents:

The forwards look pretty good. There's a lot of high-end talent there, and most of it could be affordable. Tyler mentioned earlier that the Oilers might regret not going longer with Ales Hemsky's contract, and I tend to agree, especially if he'd have been willing to take less money for a couple of added years of security. I still like the deal that Steve Tambellini got, but if Hemsky would have been just as happy with four years and 4.5M, I think he may regret not going there.

The young guys, meanwhile, will all be on their second contracts through this period, and I'd be very tempted not to buy any UFA years on those deals if doing so keeps their price-point down. If you can save a million per player per year in cap hit, that's a substantial savings during a period that they expect to be competing for the Stanley Cup. Yes, that means that they'll be eligible to walk sooner, but the Oilers should be a winning team by that time if this rebuild goes according to plan, and if there's one thing that convinces players to take a discount, it's the ability to keep a winner together. The extra money should also help the Oilers to spend more in areas of need.

That extra money should also give the Oilers freedom to spend on defense. I do have a group of four listed there because it seems to me that this is probably how the Oilers see their top four defense for next season, but it's not exactly a great-looking group, and frankly, doesn't look nearly as good as it would with Tom Gilbert still on the team.

But they have what they have. Ladislav Smid and Jeff Petry are in the right age range, and while both have been very good this season, neither player has had long-term success as a top four defender. Betting on them is reasonable, but I'll feel much more confident about both if they perform as well next season as they have this season. Ryan Whitney and Nick Schultz are the veterans, and I don't know that I'd want to count on either guy to be an effective top four option in two or three years. They may end up being transitional players who will either leave or have lesser roles as younger defenders emerge. The problem there is that most of the best young defenders - Oscar Klefbom, Martin Marincin, and David Musil - probably won't be ready to emerge.

Let's take a quick look at the Oilers' system: 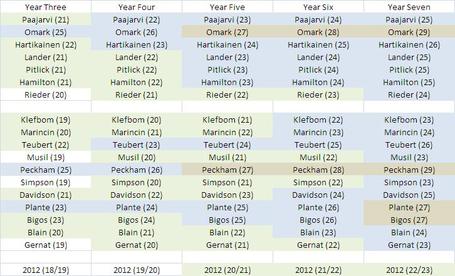 Once again the forwards look great. It's possible that each of the top four forwards develops into a solid top nine contributor by the time the Oilers hit Years Five and Six, which would give the Oilers six in total. And if they don't, there is a bunch of other players who might surprise, and of course, there's nothing wrong with filling in with a couple of veteran free agents in the team's middle six.

But the point I was making above about the defense really shines through. The only defenders who will be twenty-five by the time the Oilers hit Year Six are Colten Teubert, Theo Peckham, Alex Plante, and Kyle Bigos, and I wouldn't be counting on any of those players to develop into a solid top four option in the NHL. It's possible, of course, but not all that likely. The younger players (even if the Oilers draft a defender with this year's lottery pick) may not be ready.

One way of solving this problem is overpaying a free agent either this summer or next. That solution is made much more difficult because of Shawn Horcoff's presence on the roster. Horcoff is already in decline, and is under contract for Years Three, Four, and Five above. Because the Oilers have so much "dead money" tied in there, it's pretty hard to justify consciously overpaying at another position. But if the Oilers can get out of their commitment to Horcoff, it probably makes a lot of sense for them to go that way.

If they can't, that leaves the trade route. It would be excellent if the Oilers could use a combination of their young defenders outside the NHL to make that happen, but if not, they are in a position to deal one of their forwards from a position of strength, especially if they're in position to draft a forward in this year's draft.

In the end, I'm very optimistic about the forwards on this team, but the defense needs significant work from an area other than the draft table. As the club moves into the summer, that's the big move I'll be watching for.