Mike Milbury's Cinderella run (of terror) came to an end this morning. Doug MacLean wiped the floor with him, taking 66% of the vote in the semi-final match, though that was (by far) the closest vote so far.

Over the next few days, we'll vote to determine who MacLean will be up against in Monday's final. Will Scott Howson be able to make this an all-Columbus finale, or will Don Waddell, the tournament's top seed, avoid the upset and march to war against his expansion brother? To help you decide, I'll take a closer look at five of the worst post-lockout moves of each of our contenders. 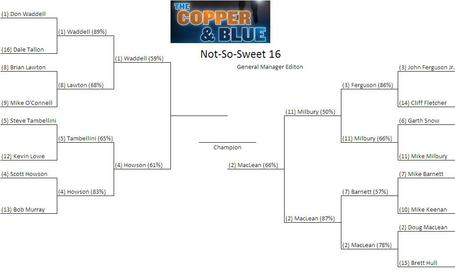