The quarterfinals finished up yesterday with Don Waddell beating Brian Lawton in what was a pretty tight race. Not of course, as tight as Mike Milbury's quarterfinal victory, but tight nonetheless. In today's match-up, Milbury will look to continue his Cinderella run, but he'll be facing his toughest opponent yet, the decidedly unvenerable but still very much terrifying Doug MacLean. Milbury has mostly been winning off his long-term track record so far, which is a bit odd in a tournament trying to determine the league's worst general manager from 2005 to 2012. But today, for the first time, he faces an opponent with a similarly terrible long-term track record to go along with a terribly blunderous post-lockout performance. A list of each man's five most damaging post-lockout moves comes after the jump. 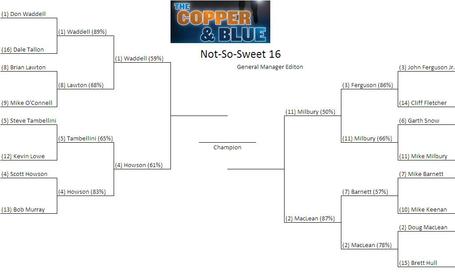