Share All sharing options for: Shot Blocking Outside the Prime Scoring Area

I’ve touched on this subject before but the more I watch the game at the NHL level, the more convinced I am that the next big coaching innovation will be getting out of the block every shot mentality.

The shot block, when done properly, is a useful defensive tool to help keep the puck to the outside of the zone and away from the goaltender. Conversely, when it`s done poorly it can result in pucks going into the back of your net that otherwise wouldn`t have.

The first thing to do is identify the prime scoring area (PSA). This is the area on the ice where the majority of goals in the NHL are scored from. The following diagram illustrates the PSA in white, with the rest of the zone in green. 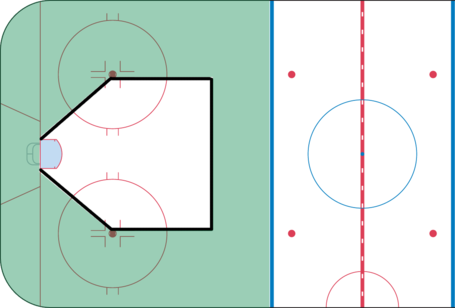 Shots from the green zone are ones you’d expect your goaltender to stop. I’m confident that an NHL goaltender will save an unscreened shot from this location roughly 98-99% of the time.

If I were coaching, the one thing I’d stress to my team is that you really shouldn’t be putting yourself out of position to block a shot from in the green zone. Putting yourself out of position includes sliding, dropping down, skating away from your check, etc. If you are in the shooting lane, cut the distance off and make the block, but don’t go out of your way to do it.

When you factor in how often a goaltender should stop a shot from these locations, the potential risks of attempting a block in these locations outweigh the benefits. You could end up missing the puck, which could put you out of position and allow an even better opportunity to open up. You could tip the puck past your own goaltender. The opposition could draw you out of position and instead of shooting, pass the puck to a player you should have been covering instead.

Ladislav Smid’s goal versus the Blue Jackets is a pretty good example of why it’s a poor idea to go out of your way to block a shot from outside the PSA.

The puck goes up to Smid and it’s a pretty clear lane to the net. There are no Oilers around and the Blue Jackets have plenty of guys to win possession on a rebound. Ryan Russell, who is 30 feet away from the puck, starts to move into the shooting lane. 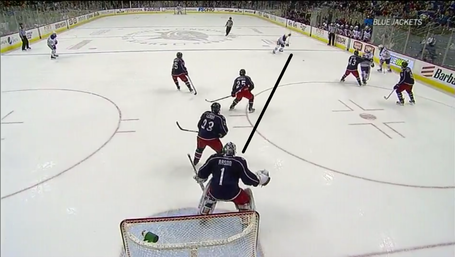 Russell cuts off Steve Mason’s view of the puck, and because he’s sliding into the block has to try and compensate as he over plays it a bit and slides past the block. 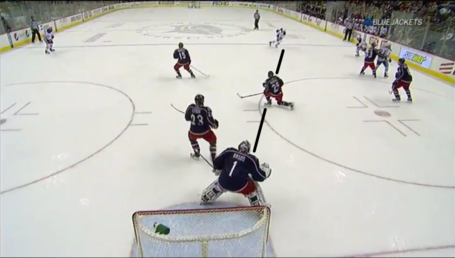 Russell puts his hand out on the block and ends up deflecting the puck to the opposite side of the net. So not only does he not block the shot, he screens his goaltender and changes the path of the puck. As much as Mason gets the gears for being a poor goalie, that was going to be a pretty routine save. Russell was too far away from the puck and too far out of position to make that block effectively. 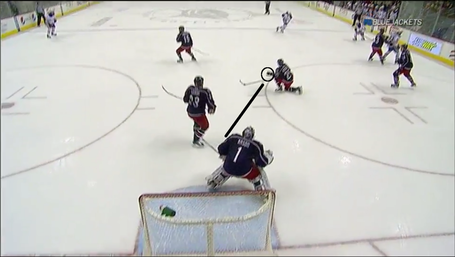 As a coach (and a goalie), I’d rather have him move to his left to give Mason an even better view of the puck, while at the same time scanning the zone to see where he should be going after the save.

A shot block is like the slap shot or the hip check or really any other hockey skill. There is a time where it is the correct play and a time where it is the absolute wrong play. Too many NHL players are making poor decisions about when and where to block a shot and I bet, based on past coaching trends, on that will get focused on very shortly.