Yesterday, we saw the second seed absolutely slaughter his competition when Doug MacLean walked through Mike Barnett, taking 87% of the vote. That's the second-largest margin of victory in the tournament so far. The only person who was more decisive in victory was number one seed, Don Waddell, who hammered Dale Tallon in his opening-round match-up. But I think today's match-up for the last spot in the semi-finals will be very close. Yeah, Don Waddell was bad, but Brian Lawton is no slouch. I'll make a positive case for each man after the jump, but honestly, we might just see an upset.

Brian Lawton's time at the helm in Tampa Bay didn't see a lot of good things happen for the Lightning, but he had truly terrible ownership to deal with for his entire tenure. The ownership card is one that a lot of men in this tournament could play, but Lawton's situation may have been the worst of all of them. As a group, they definitely weren't afraid to make bold moves in an effort to make the team better immediately. Yeah, I know that doesn't excuse the bad signings and trades that took place under his watch, but it does put them into a proper context. The owners wanted to win, and wanted to win now, so there was incredible pressure on Lawton to make big moves. Those may not have worked, but like everybody else, Lawton had his moments when things went right. At the 2010 deadline, for example, he acquired Teddy Purcell and a 3rd-round pick for a spent Jeff Halpern, That's a really good trade. He also made excellent short-term UFA bets in the summer of 2009 on Antero Niittymaki and Alex Tanguay. In the small things, Lawton did well, and you get the sense that if he was allowed to start small in his first couple of years, then he would have been much better off. Brian Lawton isn't that bad.

Don Waddell didn't build consistently crappy teams. What he built were consistently mediocre teams. Waddell is in the minority of managers in this tournament with a points percentage north of .500. Unlike Lawton, Howson, Tambellini, and Barnett, he also never saw his team finish in the bottom two. He's the only quarterfinalist to have won his division. The team's big picture performance is just flat-out better than that of the other contenders in this tournament. Waddell also didn't have the best hand dealt to him. After supporting Dany Heatley through the grief of killing his friend and teammate in a car accident, Heatley demanded a trade coming out of the lockout. Waddell was able to trade him to the Senators for Marian Hossa and Greg de Vries, a truly excellent return in terms of present value. Compare that to other times when a superstar was traded (Chris Pronger from Edmonton, Roberto Luongo from Florida, Dan Boyle from Tampa Bay, Joe Thornton from Boston...) and Waddell comes out looking very good indeed. He ended up in a pickle with Ilya Kovalchuk, but that had way more to do with ownership than it did Waddell. Kovalchuk wanted to stay in Atlanta, but wanted an assurance that the team would be staying in Atlanta. Waddell wasn't able to give it, and just over a year later, Kovalchuk's concerns proved to be well-founded. Don Waddell was far from perfect, but he did a lot more right than most of these others, and is being unfairly punished for his team having moved. Don Waddell isn't that bad. 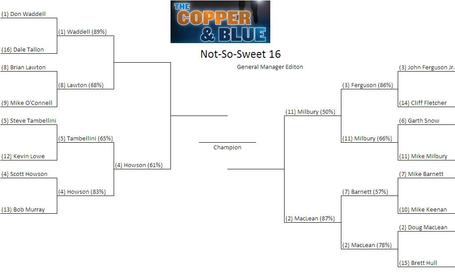