In yesterday's quarterfinal, we had by far the closest vote of the tournament when Mike Milbury edged John Ferguson Jr. by a single vote after Islander fans arrived en masse and showed a truly Milburyesque level of judgment in voting for Mad Mike. Regardless, Milbury is on to the semi-finals where he'll meet the winner of today's match-up between Mike Barnett and Doug MacLean, two men who had almost identical records in the first two seasons after the lockout. After the jump, I'll try my hand at defending the indefensible reign of our two contenders.

The Phoenix Coyotes were not a successful franchise under Mike Barnett as their points percentage in his two seasons attests. But the Coyotes have been a moderately successful franchise since his departure, and much of that is because of the groundwork laid by Barnett. In the 2005 draft, Barnett had just five selections (and just two in the top 100), but came away with Martin Hanzal (at 17) and Keith Yandle (at 105), two players who are tremendously important for the Coyotes today. Later that summer, he traded Erik Westrum and Dustin Wood for Zbynek Michalek. After the season, he signed Michalek to an outstanding four-year contract that had a cap hit of just $1.25M per year. Michalek became the team's top shut-down defenseman and provided outstanding value. The 2006 draft wasn't nearly as successful for Phoenix, but they did manage to turn Peter Mueller into Wojtek Wolski into Michal Rozsival, while Chris Summers is just now starting to establish himself at the NHL level. That summer also saw Barnett avoid making a mistake with Ladislav Nagy, signing him to a one-year contract in the summer of 2006 instead of going long-term and then cashing him in at the deadline for a first-round pick in the 2007 draft. Shane Doan was another pending unrestricted free agent, but Barnett decided to keep him, inking him to a five-year deal that would pay him $4.55M per season. It probably looked a touch expensive at the time (Doan was 30 when the deal was signed so there was significant risk), but it's a deal that has paid off big. When we talk about Mike Barnett, the focus tends to be on the big free agent mistakes, but Barnett also gave the Coyotes many of their most important building blocks over the last several years. Mike Barnett isn't that bad.

Doug MacLean did some nice things for this franchise. First and foremost, Doug MacLean was the managerial equivalent of being "good in the room", which is to say that the franchise was much more successful at getting the community interested in hockey when MacLean was around to promote it. He managed to bring the fans back after the lockout, and then again after the team had a rough season in 2005-06. Like it or not, that's a big part of the job in an expansion market, and MacLean did it very well. In terms of his actual hockey moves, it's not like it was all bad. One of his first moves out of the lockout was to sign his star player, Rick Nash, to a five-year deal that would pay him $5.4M per season. He also made several small trades that turned out very well, acquired Jason Chimera, Michael Rupp, and Cale Hulse from his opponent today for Geoff Sanderson and Tim Jackman; Fredriks Modin and Norrena from Tampa Bay for Marc Denis; and Curtis Glencross and Zenon Konopka for Mark Hartigan and Joe Motzko. He signed Manny Malhotra in the summer of 2006 to a three-year deal that had a cap hit of just $1.2M, and inked Rostislav Klesla to a similarly affordable four-year deal that paid him just $1.6M per season. Was it all good? No, of course not, but it wasn't all bad either. Doug MacLean isn't that bad. 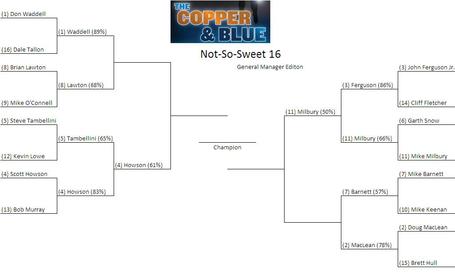