Over the weekend, the first quarterfinal in the Not-So-Sweet sixteen was completed, and Scott Howson defeated Steve Tambellini with a pretty hefty 61% of the vote, moving him one step closer to being declared the worst general manager of the post-lockout period. Even though I made Howson the higher seed, I was pretty surprised by this outcome simply because the majority of the voters were no doubt fans of the Edmonton Oilers and the commentary on this site (and even in the comments to that post!) tends to be quite negative when it comes to Tambellini. It was a close race, so I figured that being forced to experience the reign of Tambellini would tip the scales in his favor. Instead, Tambellini was ousted from the tournament, which tells me that the Oilers still have some open road ahead of them before they reach rock bottom.

In today's quarterfinal, we've got the epitome of rock bottom, Mike Milbury, taking on the formidable John Ferguson Jr. As with Tambellini and Howson on Friday, I'll take a devil's advocate position after the jump and defend the post-lockout reign of each of our contenders.

Defending Mike Milbury's post-lockout record isn't all that difficult because he really didn't have enough time to much wrong. Milbury made three trades, and none of them are egregious. He dealt Janne Niinimaa and a 5th-round pick for John Erskine and a 2nd-round pick (a pretty clear win), a 2nd-round pick for Brent Sopel (reasonable), and Michael Peca for Mike York and a 4th-round pick (didn't work out, but with Peca going into the last year of his deal, not devastating either). He was dismissed before the trade deadline. He didn't come close to building a great team straight out of the lockout, but he also didn't saddle the club with any (new) millstone contracts (the Yashin deal came before the lockout. I can say with confidence that Mike Milbury doesn't deserve to win this match-up. Mike Milbury isn't that bad.

I'll grant off the top that John Ferguson Jr. made some mistakes, but one thing he deserves credit for is acting quickly in an effort to make the Maple Leafs a better team. When Ferguson saw that there were problems in goal, he addressed those problems by trading a prospect (Tuukka Rask) for a more established goaltender coming off a poor season (Andrew Raycroft). Sure, the trade looks horrible now, but at the time of the deal Raycroft had a career .922 EV save percentage on 2,360 shots while Rask was a prospect who might never work out; at the time, it wasn't an awful gamble. When it didn't work out, Ferguson acted quickly to solve the problem. At the 2007 draft, he traded three picks (including the 12th OV) for Vesa Toskala. Again, it looks horrible in hindsight, but at the time, Toskala had a career .925 EV save percentage on 2,396 shots, and the 2007 draft was considered to be very weak. It was another reasonable gamble, and Ferguson was very unlucky that both moves flamed out so badly. Ferguson was also aggressive in improving the team in free agency. Did he overpay for players like Pavel Kubina and Jason Blake? Sure, but that's what you do to acquire talent in free agency. With a near-unlimited budget and a rising cap, that kind of spending makes some sense. Furthermore, the teams he built weren't exactly bottom-feeders. The 2005-06 team was admittedly mediocre, but they weren't eliminated from playoff contention until the last game of the season, and finished with 90 points. The 2006-07 team was 2nd in the league in shot differential at +4.3 shots per game, but were dragged down by the aforementioned terrible goaltending. Ferguson was dismissed during the 2007-08 season, but that team was again among the top ten in shot differential, this time finishing seventh at +1.7 per game. With some better luck between the pipes, John Ferguson Jr. would be remembered very differently in Toronto. John Ferguson Jr. isn't that bad. 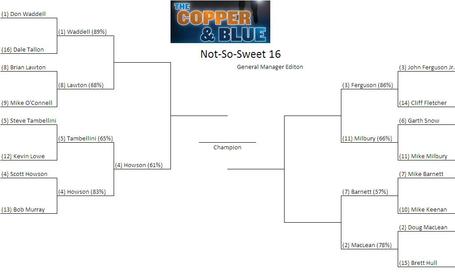