In the game versus the Predators on Tuesday, the Oilers made several coverage errors that lead to goals by David Legwand.

On the first goal, The Oilers were in good defensive position before completely falling apart with just a few seconds left in the period. In the final few seconds of any period, it’s important to remember that the puck needs to get to the front of the net, and there is no sense chasing someone who doesn’t have the puck outside the prime scoring area. 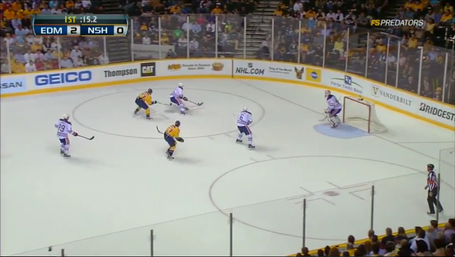 The Oilers start off in good position. Nick Schultz has the puck, Whitney is near him for support and Gagner is the first forward back in the middle of the zone. 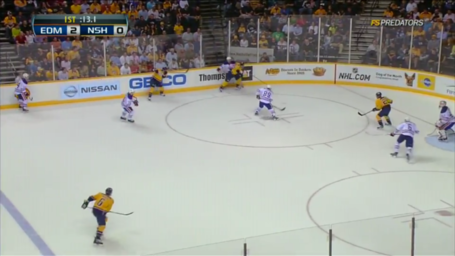 Schultz turns the puck over and has lost his position, but Gagner is back covering for him. Eberle is at the high point and Hartikainen came over to pressure the puck. You can see Weber wide open up high, but there’s no real way to get the puck to him, provided Hartikainen adjusts to the middle more. 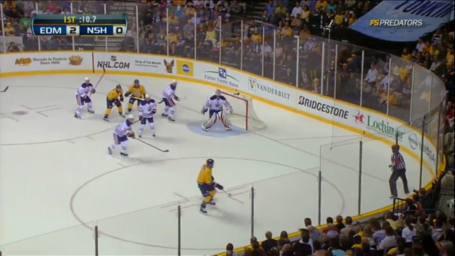 The puck goes to the other side of the zone and Weber pinches in. Hartikainen is the first player coming over. Gagner is holding in the middle of the zone and both Schutlz and Whitney are in good position as well. You can kind of see Legwand just off the screen. Eberle is covering the high point man. Even though they are in good position, this is where things breakdown. 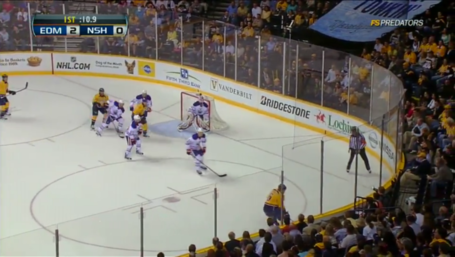 The Predator directly in front of the net carries through to the side and for some reason, Schultz follows him right over. 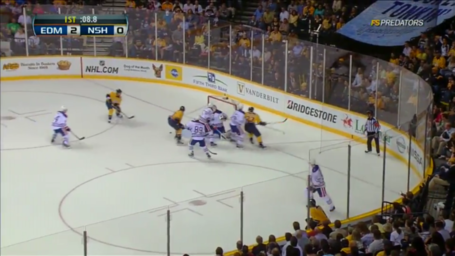 You can see Gagner, Whitney and Schultz both on the same side of the ice, with Schultz and Whitney covering the same guy, leaving 2 Predators open in front of the net. With that little time left, the opposition is going to try and force the play to the front of the net. Schultz really shouldn’t be crossing over to the other side because the man he’s covering is taking himself out of the immediate play anyways.

The second Legwand goal started with a breakdown in the neutral zone, thanks to a poorly executed 2 man forecheck. When you press with 2 players, it’s important to remember that you are leaving a lot of space in the neutral zone for the opposition to break out, and that your 3rd forward has a lot of defensive responsibilities. 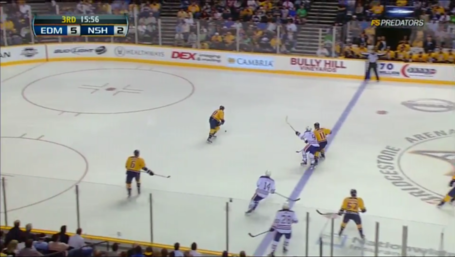 Ryan Nugent-Hopkins is the first forechecker, and Eberle is going to leave the zone and head to the far side to help close off that lane. 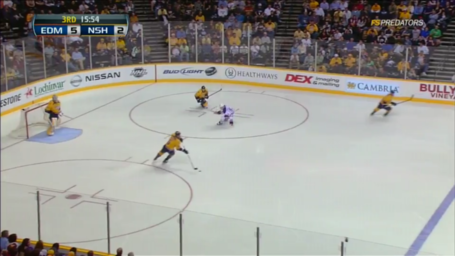 Nugent-Hopkins is currently the lone forechecker with 3 Predators in the zone with him. Both Eberle and Ryan Jones are back in the neutral zone. 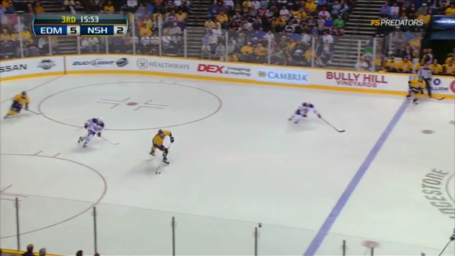 As the puck is advancing forward, Eberle comes in for pressure and ends up having to turn back around. As he comes in, the Predator on the far wing is breaking out. The Oilers went from having a 4-2 man advantage in the neutral zone to being 3 on 3 in literally 2 seconds. 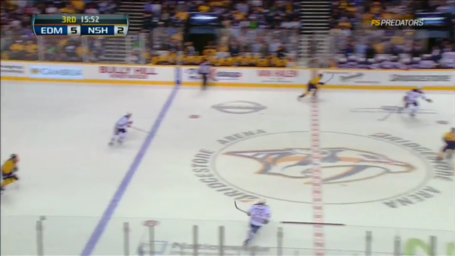 During all of this, Ryan Jones is hanging around the boards not really covering anybody, and the whole middle of the ice is wide open. 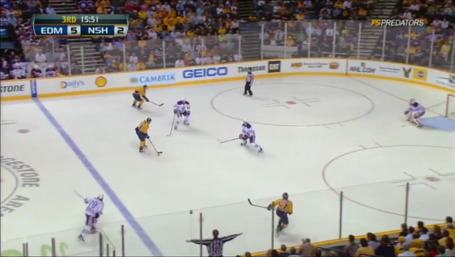 The Predators gain a relatively easy 3 on 2 thanks to some just dreadful neutral zone work by the Oiler forwards. The Oilers broke themselves down and gave up the entire middle of the neutral zone. Eberle initially made a poor choice in coming into the zone, especially when he had no real way to pressure the puck, and Jones compounded it by watching it all from the safety of the near side boards.