What Is Wrong with the San Jose Sharks?

Share All sharing options for: What Is Wrong with the San Jose Sharks?

The Sharks were riding high on February 1st. They were 28-14-6, two points up in the Pacific Division race with three games in hand. In the next 25 games, from then up until their game last night over the Bruins, they went 8-13-4, dropped to tenth and are now fighting an uphill battle just to get into the playoffs.

What has gone wrong for them? Has their play at even strength or on special teams been poor? Have they just had bad luck? Let's fire up the ol' underlying-numbers machine and take a look.

Let's first look at the possession numbers at even strength. Here is a graph of their Fenwick rate with the score close as the season has gone on. The blue line gives the season to-date average, the red line is a rolling average of the latest 10 games: 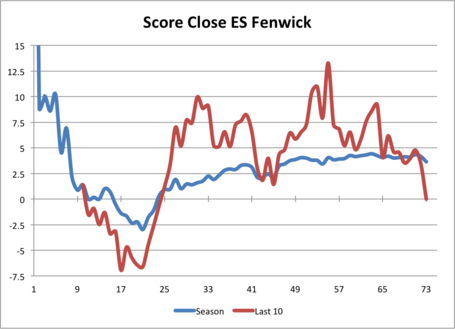 Over that 25-game stretch, their numbers have been a little worse than the first 48, but not too different.

Doing a paper-napkin calculation, the small drop in score-close Fenwick has cost them roughly a goal.

Let's now turn to the luck realm, and look at their even-strength PDO. PDO is the sum of their shooting percentage and save percentage. For small samples like 25 and 48 games it is overwhelmingly driven by luck, so it will serve as a measure of how their luck has been and changed. Anything over 1 would be considered fortunate, anything below one shows bad luck. Here is a chart with their PDO over the season: 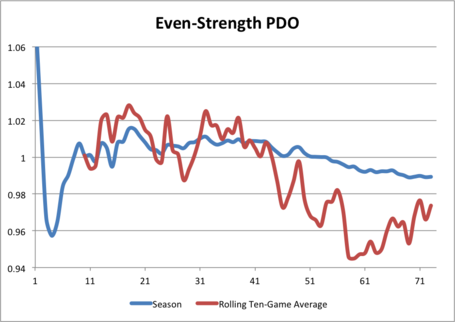 As you can see, their shooting luck has taken a serious nosedive. This is clearly the main factor. Here are the numbers:

Accounting for luck by giving them those shot rates isn't quite fair because of score effects - if more of their shots had gone in, they would have been ahead more and probably gotten fewer shots. Looking only at situations where the score was close, back-of-the-envelope calculations give shooting and saving luck credit for just barely over 15 goals. I'd guess it's a little higher overall, 15-20 seems like a good estimate. That's about 5-7 league points, a difference between being 2 points out of the division lead or 8th and 4-6 points clear, comfortably in the playoffs at this point.

The power play has scored at a higher rate over the last 25 games, which is a product of their shooting percentage being very high,16.7%, but their Fenwick rate, whether net or only looking at their own shots, is down just slightly. Here's a table with those data:

The Sharks' penalty kill is interesting. Their save percentage was low the first 48 games and that has actually dropped a little bit. In terms of preventing entries and otherwise burning clock, the skaters have actually done a bit better, allowing about 6 fewer Fenwick shots per 60 minutes of kill time. Here are the data. The numbers listed are all shots against, so the net is actually shots against minus shots for.

In that bad 25-game stretch, the Sharks' special teams have come out about breakeven on luck. They have shot at an unsustainable percentage but allowed their opponents to do the same. In those 25 games, their special-teams PDO (PP Sh% + PK Sv%) is… 1.000. Looking at Fenwick or just shot rates, things have gotten just a little bit better on the PK and just a bit worse with the man advantage. Looks like most of their bad run is due to even-strength play.

The main takeaway from all this is that the Sharks have gotten really unlucky. Their February and March have been similar to the Devils' first few months last year. Things could certainly reverse on that front, but unfortunately they now find themselves in a hole behind some good teams playing well - see the trade-deadline improved Kings dominating them last Tuesday night. Lucky bounces keep the game interesting, but that may be little consolation to Sharks fans if their team winds up out of it, leaving the Red Wings as the only team to have made the playoffs every season since the lockout.