Not very many of the match-ups in the first round were close, but now that we've narrowed the field to eight, the choices get tougher. Yeah, Don Waddell really is that much worse than Dale Tallon, but when you start talking about heavyweights like Scott Howson and Steve Tambellini, things start to get interesting. Last round, I focused on what made each of these candidates worthy of being in the tournament, and God knows there was plenty for each one. In this round, I'll play devil's advocate and offer a brief defense of each man's tenure. After all, not everything these guys did was bad! Voting for this one will be open all weekend, and the tournament will resume on Monday with the second quarter-final.

When Steve Tambellini joined the Edmonton Oilers, he inherited a mess. He inherited all three years of Robert Nilsson's percentage-driven contract, three more years of a cancerous Ethan Moreau, three more years of a spent Steve Staios, two more years of a finished Fernando Pisani, and Shawn Horcoff's ridiculous six-year contract extension. At the minor league level, he inherited a whole lot of nothing. Tambellini tried to build a winner. In his first season, the team nearly made the playoffs, and he made a push at the deadline, moving pending UFA Erik Cole for a young and promising Patrick O'Sullivan and a pick that he was able to turn into Ales Kotalik. It made sense for the present and it made sense for the future (that O'Sullivan didn't turn out didn't make it a bad bet, just a bad result). He continued trying to build a winner that summer by bringing in veteran coach Pat Quinn and signing veteran netminder Nikolai Khabibulin. When Khabibulin was injured, it became clear that the Oilers weren't going to be able to compete, and Tambellini wisely decided not to go out and get a band-aid. That decision meant a lot of Deslauriers-fueled losses, but it also meant Taylor Hall, and a green light for change in the organization from top to bottom. Tambellini successfully traded Staios for a 3rd-round pick, traded Denis Grebeshkov for a 2nd-round pick, and traded the older Lubomir Visnovsky (who wasn't happy in Edmonton) for the younger Ryan Whitney who might be around to help when the rebuild was finished. Tambellini has built a solid stable of assets since then. In fact, eighteen of Edmonton's top twenty-five players under twenty-five have been acquired in Tambellini's three and a half years at the helm, including his pump-and-dump of Dustin Penner, which netted the Oilers both Colten Teubert and Oscar Klefbom. Yes, his record looks bad, but that's because the rebuild is only just now getting to the point where the team moves towards the playoffs, and eventually, the Stanley Cup. Steve Tambellini isn't that bad.

If Steve Tambellini inherited a mess, Scott Howson inherited a bowl of shit. Before Howson arrived, the Blue Jackets had been nothing but terrible. Howson began the slow process of building up a team that summer. He drafted Jakub Voracek, signed Jan Hejda, and brought in Mike Peca to provide some leadership for his group. A couple of Doug MacLean's mistakes were nearing the end of their contracts, and Howson did a good job of divesting. At the 2008 deadline, he traded Adam Foote to Colorado for a first-round pick and Sergei Fedorov to Washington for... nevermind. Anyway, Howson continued his nice run by signing Jan Hejda to a dandy three-year extension, and Jason Chimera to a very fair four-year extension. He was identifying good players, and keeping them in Columbus. He was also identifying bad players, and getting rid of them. He traded Gilbert Brule to Edmonton for top-nine contributor Raffi Torres, shipped the always-unhappy Nikolai Zherdev to New York for solid top-four defender Fedor Tyutin, and traded hunk-of-junk Pascal Leclaire (who had two years left on his contract) to Ottawa for Antoine Vermette, a very good top-nine forward. That's three top-ten picks who were pretty busty turned into valuable contributors. That's not an easy thing to do (it sure beats what the Oilers got for Pouliot and Schremp). He also made some good signings in that summer of 2008, bringing in R.J. Umberger and Kristian Huselius. Were they a bit expensive? Sure, but that's what you need to do to compete in free agency, and the contracts weren't ridiculous. The Blue Jackets made the playoffs for the first time in 2008-09 and things seemed to be on the right track. Rick Nash sure thought so or he wouldn't have signed that eight-year contract extension in the summer of 2009. Granted, things have fallen apart a bit since then, but even Howson's more recent moves weren't awful. Getting Jeff Carter for a couple of young maybes really isn't such a bad deal! The guy just counted on Steve Mason too much. It was one mistake - made a few times in a row, granted - that caused him to make his other bad choices (like firing Ken Hitchcock). It wasn't until these last few months that things have gone full-on stupid, and let's face it, Howson hasn't been the guy calling the shots. Scott Howson isn't that bad. 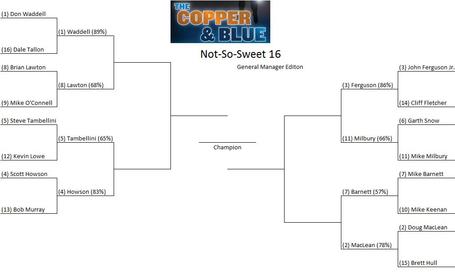