After seeing that Doug MacLean was the number two seed, I'm sure no one is surprised to see that Don Waddell is getting top billing. MacLean obliterated Brett Hull in his first-round match, although he was the first top-four seed to win with less than 80% of the vote. Will these four men be our final four? Waddell will first need to get by Dale Tallon, a man that has built two also-rans into playoff teams. Why is Tallon even in his tournament? Find out after the jump.

The man who built the Blackhawks, and who will very likely help Florida make the playoffs for the first time in a decade in his second season in charge has made my list. Obviously, this isn't a case of Tallon doing exclusively stupid stuff, but the man has made a huge number of poor decisions. Coming out of the lockout he signed Nikolai Khabibulin, Martin Lapointe, and Adrian Aucoin to truly horrendous contracts. They finished well out of the playoffs, which of course means that it's rebuild time! That let Tallon coast for a couple of seasons before he started wanting to get good again. That led to him paying Cristobal Huet, whose contract expires this season, huge money, and giving Brian Campell approximately eleventy-billion dollars. After forgetting to tender restricted free agents their qualifying offers cost him his job, you'd think that Tallon would have been glad to be free of that Campbell deal. You'd think wrong. When he got to Florida, he traded for it! He followed that trade by signing Sean Bergenheim to a four-year deal at $2.75M per year, Tomas Kopecky to a four-year deal at $3M per year, Tomas Fleischmann to a four-year deal at $4.5M per year (+NMC), and Ed Jovanovski (who's over 35 years old) to a four-year deal at $4.125M per year. The Fleischmann deal has worked out pretty well, but those other contracts remain pretty frightening. Despite the Cup in Chicago, and the recent success in Florida, I am far from convinced that Dale Tallon is a decent general manager. In fact, I think he's been one of the worst.

Only one team has relocated since the lockout, and that team is the Atlanta Thrashers. That's not even close to being all Don Waddell's fault, but he does share in the responsibility, and for that, he takes down the number one seed in this tournament. Coming out of the lockout, Waddell had spent five years rebuilding, and with teams on even financial footing, Waddell was ready to make the Thrashers into a winner. His first order of business was honoring Dany Heatley's trade request, which he did when he traded the forward to Ottawa for Marian Hossa who had just signed a new three-year deal. It wasn't an ideal situation, but Waddell made the best of it. Add Hossa to young studs like Braydon Coburn, Ilya Kovalchuk, and Kari Lehtonen, and a couple of prime players in Marc Savard and Slava Kozlov, and it looked like there was a solid foundation for this team to win for several years to come. In that first season, Waddell wanted to make sure that his team had the veteran support that they needed, so he added veteran free agents like Peter Bondra, Shane Hnidy, Scott Mellanby, Bobby Holik, and Greg de Vries. Some of them were too old, and others he paid too much, but you can see the logic behind this plan. The Thrashers didn't make the playoffs that season, but they won 40 games for the first time, and things seemed to be on the right track. Then it all went to hell. He started by letting Marc Savard walk over the summer. Then he traded a 21-year-old Coburn to Philadelphia for an overpaid Alexei Zhitnik as well as 1st, 2nd, and 3rd-round picks to St. Louis for a few months of Keith Tkachuk. The Thrashers made the playoffs, but young goaltender Kari Lehtonen was mocked by his coach and then replaced by his backup for the team's last two games as the Thrashers went out in four straight. The coach lasted six games into the next season before being fired. Waddell coached the team himself for the rest of the year. Previous experience? Three seasons in the IHL, the most recent in 1991-92. That year was also Hossa's turn to go, and Waddell traded him and Pascal Dupuis at the deadline to Pittsburgh for Colby Armstrong, Angelo Esposito, and Erik Christensen. In terms of present value, Dupuis is probably the second-best player in the trade. When you're trading for futures, that's not good. After a respite in 2008-09, 2009-10 saw the departures of Lehtonen, Kovalchuk, and another coach. Waddell was "promoted". A year later, the team moved to Winnipeg. 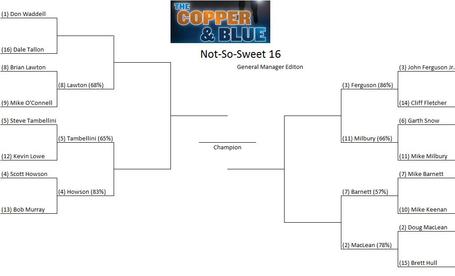