I actually find it hard to believe that John Ferguson Jr. was more dominant in victory than Scott Howson was in his opening-round match-up, but there you go. His opponent in the next round is Mike Milbury, which would be an epic clash if we were considering their entire tenures, but in limiting ourselves to post-lockout action, Ferguson loks like he'll probably be a shoe-in for the semi-finals. Today's heavyweight, Doug MacLean, might just meet him there. Can Brett Hull continue the hilarious trend of fifteen seeds pulling the upset? (Aside: Duke losing was about as awesome as it gets. Thank you Lehigh!)? Find out why he stands a chance after the jump.

I feel bad for Les Jackson. He was co-GM with Hull in Dallas for this period, but he's not in this tournament for a reason. He just wasn't that bad. Yeah, Brad Richards was probably a touch overpaid, but Dallas acquired him for a pittance, taking advantage of a group of a much bigger mess in Tampa. I attribute that, and most anything else that went right during this period in Stars' history to Jackson. Hull, on the other hand, absolutely deserves to be here. The concept of dual general managers does seem a bit goofy, but shared authority can work really well, particularly if the people involved have different strengths. Maybe one guy is an excellent negotiator, while another has a great handle on the CBA, something like that. But it can also be frustrating when one guy is doing all the work and the other guy advocates strongly to give Sean Avery a four-year $3.875M per year contract. Say what you will about Doug MacLean, at least he tried to do the job.

There could be a lot to say here, but I'll be brief. Coming out of the lock-out, there should have been an opportunity for this team to be very good. After all, the club had had six consecutive top ten picks. Doug MacLean even seemed to agree that this was the case when he acquired a very expensive and somewhat elderly version of Sergei Fedorov for a young Francois Beauchemin in November of 2005. The Blue Jackets finished with 74 points that season. They finished with 73 the year after that. Doug MacLean was a nightmare. 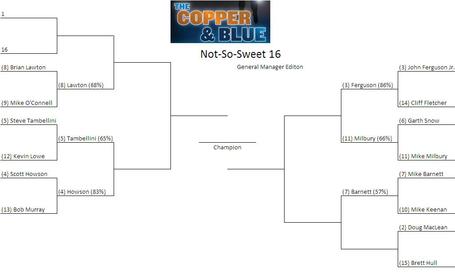