Share All sharing options for: Matt Donovan - An Oklahoma Kid With NHL Potential

Despite my convictions and deep rooted love for hockey in Oklahoma, it remains a rare commodity. One that is considered a fringe sport or even odd in most circles, there's no denying the simple fact that there exists a sizable gap when it comes to knowledge and excitement for pucks, sticks, boards, and nets. However, that gap is quickly narrowing. So much so that the state is beginning to churn out players that have future NHL potential

If the National Hockey League is looking for a story that highlights growth in the sport in unlikely places, they need not look any further than Edmond, Oklahoma.

Meet Matt Donovan. Before I go any further, I'll assume that this name rings a bell both for the Canadian readership and its Oklahoma counter-part. Young Matt Donovan, of the aformentioned Edmond, Oklahoma, is a USHL alum who garnished an All-Rookie team and first team All-Star vote in consecutive seasons in that league. He'a also the All-Rookie and second team All-Star defenseman from the University of Denver. But you may recognize Matt Donovan for other reasons. Donovan was a part of the 2010 US World Junior team that defeated a dandy Canadian squad in 6-5 OT fashion. In seven games Matt earned three goals and two assists, and all but perked the attention of NHL scouts from one coast to the next.

Prior to his rookie season at the University of Denver, Donovan was drafted by the New York Islanders in the fourth round. Looking to gain a potential NHL, puck moving, offensive-minded defender, the Islanders eventually would sign him to a three year entry level contract that began this season. He's spent his entire pro rookie season with the Bridgeport Sound Tigers in Connecticut. There he's been having a marvelous season for a rookie defender. Seven goals and twenty-eight assists through fifty-nine games. This has him in the top ten statistically in the entire American Hockey League among defensive players. Not bad for the kid from Edmond, Oklahoma.

...[my dad] runs Blazers Ice Centre in Oklahoma City. I've been around the rink my entire life.

Growing up Matt couldn't help the fact that he was surrounded by hockey. "My freshman year in high school I went to Edmond North. And then I moved to Dallas to play midget triple-a hockey for the Dallas Stars," says Donovan of his youthful years, "and then I got drafted into the USHL and played my junior and senior years of high school in Cedar Rapids, Iowa." But the hockey connection was made even earlier than that. "My dad actually ran Iceland Sports Center in Bethany which doesn't even exist anymore," mentions Donovan, "He then switched rinks and began running Arctic Edge in Edmond, and now he runs Blazers Ice Centre in Oklahoma City. I've been around the rink my entire life."

Matt's father Larry, a Boston native, infused the Donovan household with enduring hockey passion. "My dad played hockey through high school," says Matt, "He went to college in Boston and was sent to East Central in Ada on an exchange program where he met my mom, and eventually settled in to the Oklahoma City area." Larry's simple love of the game was on full display not just in the rinks that he ran, but occassionally with the Oklahoma City Blazers. "Believe it or not, my dad actually played three games with the Blazers," says Matt fondly of his father, "He was playing men's league and Doug Sauter called him up and said, 'We need a guy!' and my dad gladly accepted." Oh the joys of the old Central League.

Not lost on the 21 year old Donovan is the successes he has had in his junior and collegiate years. "I'd agree that I've had a pretty amazing amount of success considering I'm from Oklahoma," Donovan states proudly, "Not that many kids from Oklahoma get this chance so I'm making the most of it"

And it seems that the young defenseman is getting better. As a Bridgeport Sound Tiger (affiliate of the New York Islanders) player his numbers steadily increase as his team marches towards a really strong playoff spot in the Eastern Conference of the American League. "Being in Bridgeport is great. They've been great to me. I think I'm gradually getting better, and I feel like my game is getting better with the coaches help," says Donovan proudly, "I've simply played my style of game, and improved it along the way." A young defender that can move the puck well, make few mistakes, and shoot the puck are a hot commodity these days, and Donovan seems to fit that bill nicely. "I've always been kind of offensive, a powerplay guy, a guy that likes to jump up in the play," states Donovan, "As the forwards in the pros look better, my defensive game needs to improve and I think that it has."

Contracted on an entry level deal through 2013-2014, the Islanders will likely hang on to this improving, young defender. But one has to wonder, what does the future hold for Donovan. Would he ever consider returning to Oklahoma City? Perhaps as a Baron? "I'm hoping that one day I won't have to make that decision," says Donovan with conviction, "My goal is to be in the NHL, and although playing in Oklahoma City would be bittersweet, I hope I never have to choose to play in another minor league city." And from a fan perspective I couldn't agree more. Sure I'd love to see him back in Oklahoma, but he does more for furthering the game locally by making it to the NHL as strange as it might sound.

From Oklahoma to Texas to Iowa to Connecticut, Donovan has travelled a lot of ground. Often forgotten in hockey life is the maturation process for young players in the minors. "I live in Milford (right outside of Bridgeport, Connecticut), the weather is getting nice, and I'm sure we'll be at the beach a lot," says Matt of his new Connecticut home, "the fans are great and the city is great. I enjoy all of it." 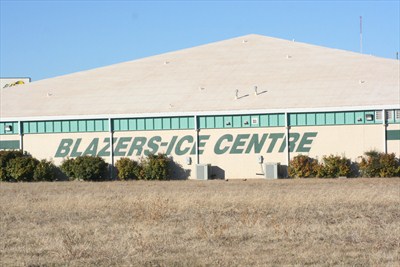 But he still fondly remembers his Oklahoma roots. "I was at most of the Central League Blazers games," remembers Donovan of his not-so-distant childhood, "if they were playing, we were there." And there's still things that Matt misses about home. "My family and friends are still there," he says, "oh, and the Mexican food. The Mexican food is very different in Connecticut."

In the offseason Matt trains in Oklahoma City. And it doesn't hurt to know the guy with the key to the local rink. "I come back to Oklahoma City every summer to train. Since my dad owns a rink it ends up being a pretty nice setup," says Matt.

You have to understand that Matt is a sports anommaly in Oklahoma. And that's not taking anything away from Donovan. It's actually quite an achievement. As youth hockey continues to grow in this state, and the Barons continue to promote a solid brand of interesting hockey, young players in non-hockey markets can use players like Matt Donovan as lighthouses of future potential. It's rare to find a hockey fan in Oklahoma City in the general population, but it's even rarer to find a hockey player with as much upside as Matt Donovan.

As the years tick by we'll watch, we'll listen, and we'll be entertained by the Oklahoma kid with NHL potential. Because it's not every day that a player like this comes along, but thanks to Matt the future of Oklahoma hockey prospects continues to be bright.