In the most dominant match-up of the tournament so far, Scott Howson destroyed Bob Murray, taking 83% of the vote. It was an impressive performance by the Blue Jackets' general manager, and makes me think that the quarterfinal match against Steve Tambellini set for Friday will be an epic battle. But before we get there, we've got the first round to finish, and today's match-up features two managers of the Toronto Maple Leafs, neither of which orchestrated the trading of two top-ten picks for the services of Phil Kessel. One was around for a long time, the other a short time, but both John Ferguson Jr. and Cliff Fletcher were terrible.

Cliff Fletcher was brought in as the interim general manager of the Toronto Maple Leafs, and was tasked with cleaning up the mess left by John Ferguson Jr. He was supposed to handle the trade deadline and one summer of free agency to help set the table for his eventual replacement. He did a terrible job. At the trade deadline, he made the obvious decision to unload veterans and stockpile picks, but after three trades, he ended up with a total of zero picks that were among the top fifty selections. With the exception of Hal Gill, he was moving pretty marginal players, so you can't find too much fault with the return, but he would have likely been able to get more if he had been able to convince Mats Sundin to waive his no-trade clause. But so far, nothing terrible. What is terrible is his penchant for subtradding. He did it when he traded Alex Steen and Carlo Colaiacovo to the St. Louis Blues for Lee Stempniak. He did it when he signed Niklas Hagman to a four-year contract at $3M per season in free agency. He did it when he signed Curtis Joseph to be his back-up goaltender. And he damn sure did it when he signed Jeff Finger to a four-year contract at $3.5M per season while thinking he was signing a different player. Not only has that contract been an albatross for the new general manager, it is also the single stupidest move any general manager has made in this entire competition. Confusing Jeff Finger for Kurt Sauer is just... well... it's inexplicably stupid. 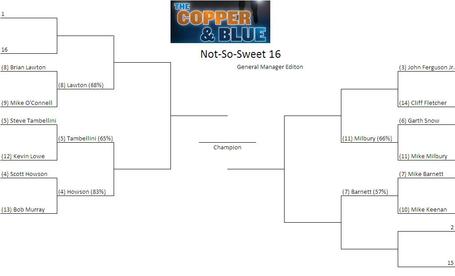