The Oilers Through Three Quarters

Share All sharing options for: The Oilers Through Three Quarters

And that's exactly what has happened. The Oilers performed similarly in the third quarter as they had in the second going by goal differential at -12, but their 9-10-3 record made for a lot more points in the standings. After the jump, we'll look at some of the team's possession numbers, which are actually as encouraging now as they've been all season. Hooray! 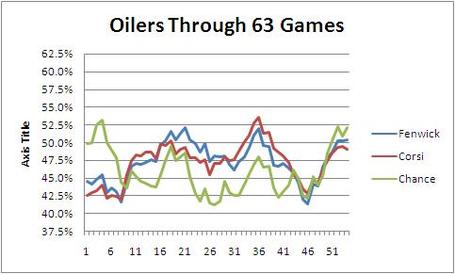 As usual, there's a lot more going on in the bottom half of the chart than there is on the top half, but the Oilers are as good now as they've been all year. The team is agonizingly close to having all three possession metrics over 50% for the first time this season, and barring terrible performances against the Stars and Ducks, they'll get there in one of their next two games.

But will they stay there? If this was a stock, and I was a trader who believed in technical analysis, you'd probably be going with a firm, "No". The Oilers have a measurement close to 52.5%? It won't be there for long. Are they down near 42.5%? It's a safe bet that they're headed up no matter how grim they've looked over their last ten games.

This segment also sees the three measures tracking very closely to one another for the first time this season, but even with all of that new data, there's still a small negative correlation between Corsi % and Chance % over the ten-game samples, and a small positive correlation between Fenwick % and Chance %. Of course, over the course of a full season, these measures come together quite nicely (the Oilers have a 47.6% Fenwick %, 47.4% Corsi % and 47.0% Chance %), but at least with the Oilers this season, ten games simply hasn't been a large enough sample for that to work out consistently. The same would be true if we looked at twenty or thirty games. Thankfully, we have all three data points for Edmonton, but it's good to know that these measurements aren't always moving in lock-step when trying to use something like Fenwick as a proxy for scoring chances over smaller samples when we're looking at teams for whom scoring chance data is unavailable.