How the Capitals Have Changed Under Hunter

Share All sharing options for: How the Capitals Have Changed Under Hunter

Dale Hunter replaced Bruce Boudreau as the Washington Capitals head coach on November 28th. Things started off well, with the Caps going 9-6-1 before Nicklas Bäckström went out with a concussion. Since that time, Hunter's popularity and the Caps' fortunes have fallen and they find themselves in a battle just to make the playoffs in a season they entered as a trendy pick for the Stanley Cup.

Let's take a look at how the coaching change has affected the Caps, after the jump.

Starting with even-strength play, here is the overall picture of how their Fenwick rate has changed. The black line marks the coaching change, the red one is Bäckström going out. 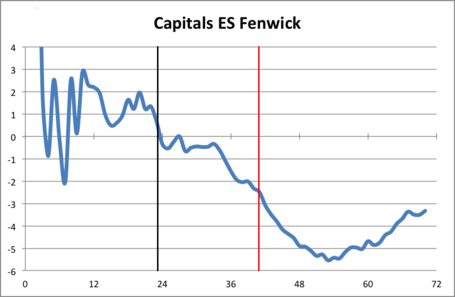 You can see that there is a pretty big drop, though they have been better lately. Here are the numbers, including those with Bäckström off the ice.

A better way to deal with Bäckström's absence is to look at the performance of players that didn't play with him very often. Here are the other centers on the roster. I've excluded all the time they were on the ice with Bäckström, which wasn't much.

The numbers speak for themselves.

Using the eye test on Washington, the Caps really seem to go into a shell defensively. I thought Boudreau was overly defensive-minded and that the Caps could benefit from a coach with a more open, aggressive style, like the Penguins did in switching from Therrien to Bylsma. Unfortunately for their fans, Hunter seems even more extreme than Boudreau. It's somewhat difficult to quantify, but one way is to look at the percentage of all shots by their opponents that the Capitals block. That has gone up significantly since Hunter came on: 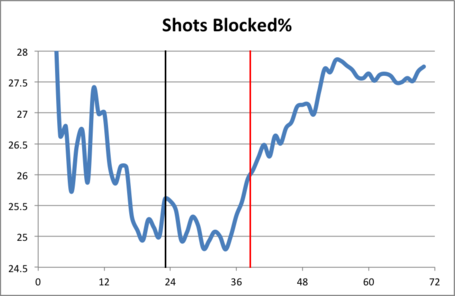 Under Boudreau they blocked 25% of their opponents efforts at goal, that has gone up to 28.8%. The Penalty Kill With Hunter's defensive approach, you might expect an improvement on the penalty kill. That appears to be the case. Here's a graph of their Fenwick shot rate allowed on the PK:

Here are the numbers: 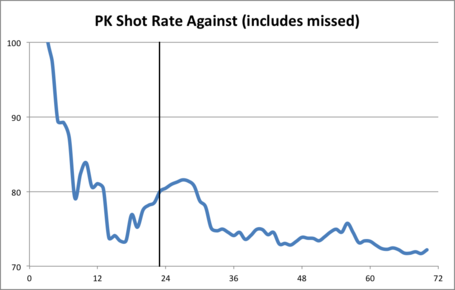 On the flip side, their power-play numbers have taken a hit under Hunter. Here is a chart with their overall Fenwick rate on the power play and their Fenwick shooting rate, so ignoring any shots against:

Here are the numbers: 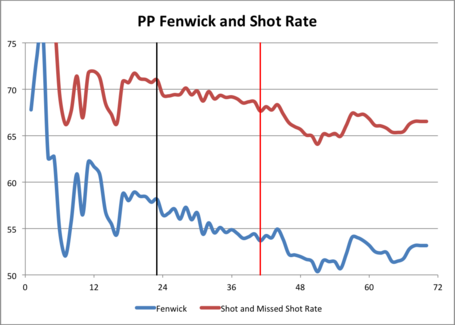 This seems unfair to Hunter given the Bäckström injury, but the Caps' PP shot rate in the 16 games before the concussion was almost exactly the same: 63.981.

Whether it's a blip or a trend, there is some reason for Caps fans to be optimistic about their playoff chances and perhaps Hunter's ability as a coach should he continue on. Looking at the ES graph near the top, you can see that they have definitely been much better over the past dozen or so games. Their net Fenwick rate has been North of +5. That is unsustainably strong, but it's definitely possible that they have gotten used to their new coach's system and he's improved in his shortened first year behind the bench. Hunter, the Caps and their fans better hope so, because the overall numbers don't look very good.