Walk a Mile in Their Shoes, Sans the Rotten Cabbage

Share All sharing options for: Walk a Mile in Their Shoes, Sans the Rotten Cabbage

"Have you even played?" is a famous line that gets thrown out there a lot in the sporting world, especially in disagreements, followed only by "You wouldn’t get it if you didn’t play at a high enough level". For the most part, I think that line of thinking is a pretty poor way to argue a point, especially considering TV is full of people who played or were involved in the game at a high level who don’t have a clue about what they’re watching.

One of the few exceptions to this line of thinking is when dealing with referees. Unless you’ve refereed at some point, it’s very hard to understand not just the thought process, but also what they are capable of seeing from where they are on the ice.

This isn’t about defending referees for every single wrong call they make, I do my fair share about complaining to the referees, but there are things that are in their control and things that aren’t.

If a referee makes the wrong call because he’s in the wrong position, or not looking at what he’s supposed to look at, the responsibility falls on him.

If a referee makes the wrong call, but is in the right position and is watching for the right plays, but misses it because there happens to be multiple players around him, I can’t really fault him.

There was a particular play against Colorado on Saturday that drove Oilersville into a tizzy. Sam Gagner went hard to the net and ended up in the crease. Ales Hemsky found the loose puck and put it in the net.

The referee in the far corner immediately blew the whistle and signaled no goal. He also didn’t call a penalty because he didn’t feel Gagner deliberately interfered with the Varlamov. 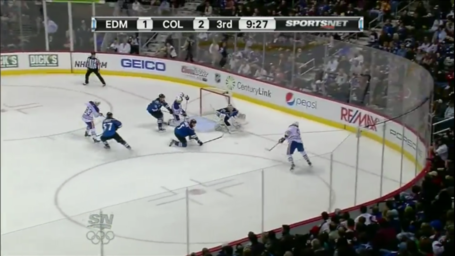 The referee is in corner watching the puck and the play in front of the net (which is his job). Same Gagner is heading to the cease (being checked by Landeskog), while the puck is centred out front. 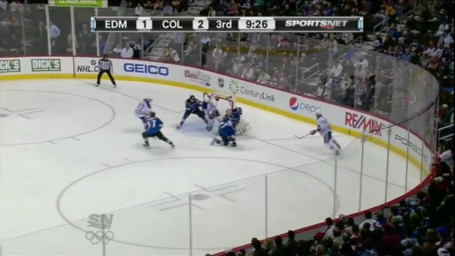 Sam Gagner is in the crease, the puck goes right on Hemsky’s stick and into the back of the net. The referee is still in proper position, but there are 2 bodies between him and the goaltender. He can’t actually see what happens, but what he sees is Gagner in the crease and Varlamov unable to get across to Hemsky.

In his eyes, Gagner unintentionally gets in Varlamov’s way and a goal is scored because of it. In that instance, he is making the correct call based on what he sees and interprets. 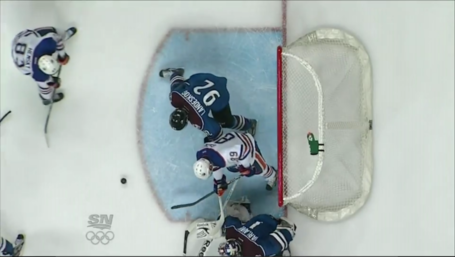 Thanks to the overhead view, we can see that Gagner slightly interferes with Varlamov’s stick, but also that Varlamov wasn’t in a position to really even make the save (his back is almost facing the puck). There is just no way for the referee to see the gap between Varlamov and Gagner. The other contributing factor is you don’t need a big collision to make this call. If the goaltender turns and a player is in the crease and in his way, that can be considered goaltender interference.

You don’t necessarily have to have been a referee, but the next time you go to complain about a call, take a look at the referee’s position and how many bodies are between him and the call he made/didn’t make. This doesn’t excuse every wrong call, but it does excuse a few of them.