How to Win and Still Be Historically Bad

Share All sharing options for: How to Win and Still Be Historically Bad

The Eastern and Western Conference playoff races are very, very interesting. Out West, there are a couple of pretty good teams that might miss the playoffs. a thing of beauty. Both the San Jose Sharks and Los Angeles Kings are on the outside looking in despite formidable rosters, strong possession metrics at even strength, and positive goal differentials too. But that kind of thing isn't really unusual. Last season, it was the Flames and Blues who missed the playoffs despite outscoring their opponents; it happens every year. But what's happening out east might just be historic.

In the Eastern Conference, there are two playoff spots up for grabs, with one being the Southeast division title. Here's how the standings look today: 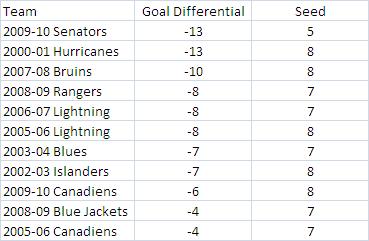 As you can see, there may be two new teams on this list from this season, and it's not inconceivable that they end up being at the very top (or bottom, I suppose) of the chart. But is it really historic? Well... no. If we look at the worst teams to qualify for the playoffs since the league expanded to 21 teams, not even one of the above makes the bottom ten: 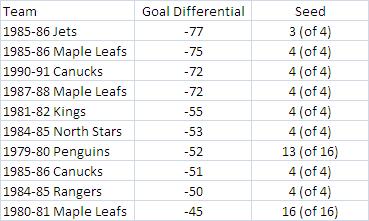 The Jets, Maple Leafs, and Canucks really were awful. Good times, those. Seriously though, this stuff is bonkers. I mean, making the playoffs with a goal differential of -70 or worse? Damn. Things sure have changed.

So it's impressively abysmal, but not quite historic. That's where the Florida Panthers offer us hope. They're in position to win their division and have a goal differential of -25. Has a division winner ever been that bad? Not for a very long time. In fact, just seven teams in NHL history have won a division with a negative goal differential:

The last team to "accomplish" the feat was the 1988-89 Red Wings. It'll be awfully tough to catch the Blackhawks and Blues, but the Panthers look likely to be the worst division winner since the league merged with the WHA. And with three or four blowout losses, you never know. Given the recent history of the Panthers, there's something strangely appropriate about the team breaking its long playoff drought with one of the worst division winners in NHL history.