When it comes to the Leafs, every move and every storyline is amplified and magnified. Toronto, being the centre of the hockey universe (Yes, I know, but let's just let them think this) means that personnel moves make national news, slumps become prayer-worthy, and breakout seasons mean hall-of-fame predictions.

Though Ron Wilson's mug is a constant fixture on TSN and CBC, and his job review is never-ending, a deep dive into Wilson personnel deployments is a worthwhile endeavor. After the jump, we'll break down his bench management strategy.

The horizontal axis shows qualcomp, specifically Corsi relative quality of competition taken from the venerable and terrifying Gabriel Desjardins' behindthenet.ca. The vertical axis shows percentage of percentage of faceoffs taken in the defensive zone, again from the venerable and terrifying one. The bubbles are color-coded: blue means the player in the bubble has a positive zonestart-adjusted Corsi, red a negative. Finally, the size of the bubble indicates absolute value zonestart-adjusted Corsi. 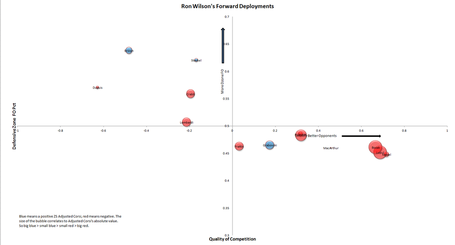 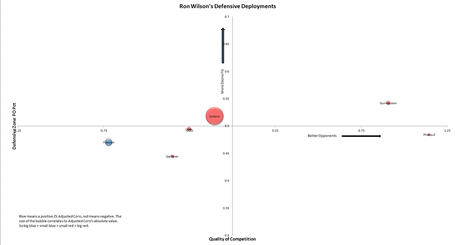