As is now their custom at Rexall Place, the Edmonton Oilers took the Chicago Blackhawks out behind the barn and put them down like a rabid dog. To be more accurate, Sam Gagner was responsible for the mercy killing. Gagner was on the ice for all eight Oilers' goals and recorded a point on each goal, scoring four himself and assisting on four others. He joins Wayne Gretzky and Paul Coffey as the only Oilers to ever record 8 points in one game. He became the first player to total eight points in one game since Mario Lemieux did it in in 1989. Gagner was four months from his birthday. The original one.

A lesser man than Gagner might declare that he's Sam Gagner and you're not, but Gagner kept laughing, smiling and pointing to just about every teammate on the ice. Gagner even had it going in the faceoff circle where he went 7-13. It was a perfect night for Gagner and a perfect night for the Oilers, at least after that first period. For at least one night, Gagner was paid back for the years of suffering and carrying Pat Quinn's onion belt. 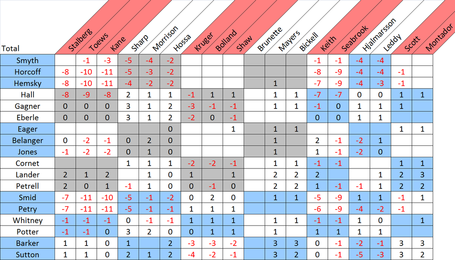 You don't need to be a rocket surgeon to know who gets top billing here. Everything Gagner touched turned to gold tonight. He had a hand in all eight Oilers' goals and was on the ice for just one goal against. The line combined for 18 of Edmonton's 41 shots on goal. They managed to avoid both Jonathan Toews and Patrick Sharp and the though zonestarts and put the boots to Dave Bolland. Gagner moved up 90 spot in total points, from 200th to 110th. (h/t Brad Fay) Gagner started the night -4 for the season (600th in the league) and ended +2, (222nd in the league) Oh yeah, those Hall and Eberle kids each contributed 4 points.

Devan Dubnyk stoped 43 of 47 shots, including 34 of 37 at even strength. Though .915 and .925 don't look overly impressive, his work in the first period was the only reason the Oilers had a chance in this game at all. Dubnyk was hung out to dry time after time, but hung on with some eye-opening saves, especially while moving laterally, his biggest weakness. Chicago put 14 shots on goal in the first period. 12! of them were scoring chances and Dubnyk gave up just one goal. Dubnyk would've been a star if Gagner didn't take them all for himself.

Jonathan Toews was remarkable tonight, even in an 8-4 loss. Toews wasn't on the ice for a single goal against and assisted on the Patrick Sharp's short-handed goal. Toews had 10! shots on goal and was hard-matched on Shawn Horcoff's line throughout. He did get the gift of the easy zonestarts at the expense of Dave Bolland, however.

On two separate occasions tonight, Ryan Whitney was able to turn, pivot and push off actually move quickly for a puck. It's something he hasn't been able to do all season. He was caught staring at the puck in the defensive zone a couple of times, but if Whitney is able to move again, there might be hope for the Oilers blueline. His mobility is the difference between a first-rate second pairing defenseman and what we've seen this year.

The Oilers' first period was the stuff of a 30th-place team. They gave up 14 shots, 12 of them were scoring chances. They were out-chanced 12-2 at even strength. It was brutal. After that, things got better. Over the last two periods, they out-chanced Chicago 14-13 at even strength.

Toews took the Horcoff matchup which left Dave Bolland to take on Sam Gagner from the defensive zone. Gagner played 11.9 minutes at even strength and Bolland was on for 7.3 of those minutes. It was Bolland's line taking it on the chin (4 GA) in the second and third periods.

That Ryan Whitney is just now recovering movement in his ankles is both concerning and annoying. Why did the Oilers rush him back? Knowing that both Whitney and Hemsky came back early from injuries means that the Oilers old habits didn't die when they overhauled the training staff.

Remind me to remind dawgbone to do a detailed look at Corey Potter's defense against the rush.

Chicago is screwed with these two goaltenders, for sure, but Joel Quenneville has to be worried that the team in front of those goaltenders just gave up 41 shots to the 29th-place Edmonton Oilers. The Oilers average 26 shots per game. It was obvious that the goaltending was bad and I'm sure Stan Bowman will address it via trade (I hear Scott Clemmensen is available), but what in the world was wrong with the team and system that allowed that mess?

Olczyk: "I think at some point now Pat, you got the Oilers up by four goals, you got guys that got eight points out on the ice...the coach keeps throwing them back out there."
Foley: "Whatsamatter, I mean why shouldn't HE? 'Sposed to play your fourth liners now?! I don't disagree with that at all!"
Olczyk: "I think somebody needs to take notice of that. I think if you saw off that last faceoff, Marcus Kruger gave a pretty good chop to the hand of, I think it was Gagner that took the faceoff...I think I put this one into the memory bank and when you get the opportunity to..."

Olczyk was cut off by Foley pointing out the goons on the ice for the Blackhawks, matched against the Oilers fourth line. But way to go Ed Olczyk. Applause all around for you. Nothing like advocating for, and approving of purposefully injuring another player because he scored a bunch of goals. Good on you. For his sake, let's hope your kid doesn't find success at Penn State and run into an opposing coach with your same mouth-breathing views on the game.