Shawn Horcoff takes far more than his share of the blame for the Oilers' fortunes since the lockout. Though no longer referred to a $7 million man, there are still a smattering of boos at Rexall Place when he's announced for any reason. Commenters, even here, beg for Horcoff to play on the third line and stay out of the way of the team's young stars.

But Horcoff's coaches haven't acquiesced to those demands. Horcoff has led the team in time on ice per game (among forwards) every year since 2006-07 and was second on the team in 2005-06. Horcoff has been used in a variety of roles, from a power-versus-power line with Ales Hemsky and a variety of left wingers to a pure checking role with Patrick O`Sullivan and J.F. Jacques. In 2010-11, Horcoff played caddy to rookie wings Taylor Hall and Jordan Eberle.

After the jump, I'll break down how Horcoff's hard work all over the ice leads to scoring chances for his linemates.

In the Oilers last game against the Calgary Flames, the score was tied 1-1 nearly half-way through the second period. Horcoff was centering Taylor Hall and Ales Hemsky as the team's top unit and Calgary was matching with the Tom Kostopoulos - Blake Comeau - Mike Cammalleri.

Ryan Whitney and Tom Gilbert were on the ice set to break out, Taylor Hall was in the zone. Horcoff is just out of the shot on the middle left. 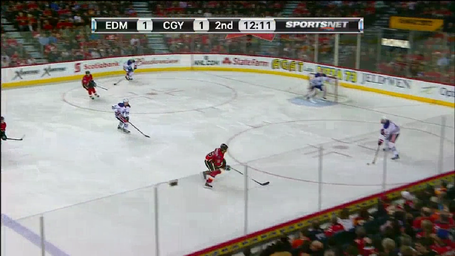 Whitney moved the puck to Gilbert and Horcoff curled off of the wall. 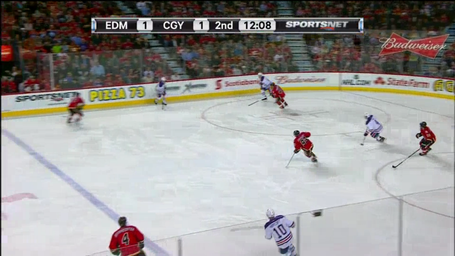 Gilbert lobbed the puck out of the zone towards Horcoff who attempted to glove the puck in the midst of three Flames. 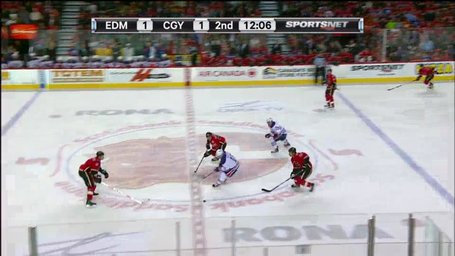 He was over-taken by Kostopoulos from behind, but stayed in the play on Kostopoulos as he entered the Flames zone. 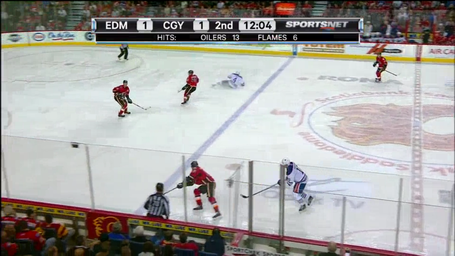 Kostopoulos turned, with Horcoff still after him, and tried to move the puck up the boards. 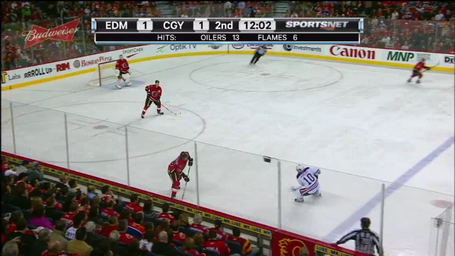 Horcoff immediately turns and heads for the spot as the Flames converged on the puck. 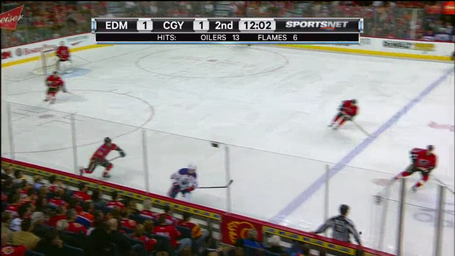 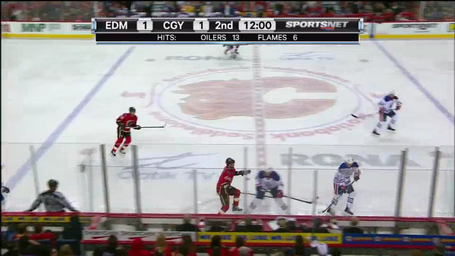 With the puck and the man both stopped cold, Horcoff has time to recover the puck on the backcheck, beating three Flames to the puck, including Kostopoulos. Note Whitney watching the play. 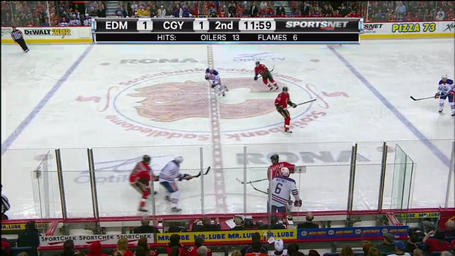 Horcoff fends off Kostopoulos and gains clear control of the puck. Note Taylor Hall on the Flames side of the neutral zone and an accelerating Ales Hemsky leaving the Oilers' zone, and Ryan Whitney moving back to the zone as Horcoff's puck recovery has taken him out of position. 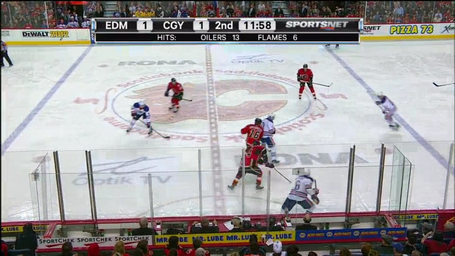 Horcoff turned up ice with the puck as Hemsky made himself available for the pass. Horcoff hits Hemsky in stride. 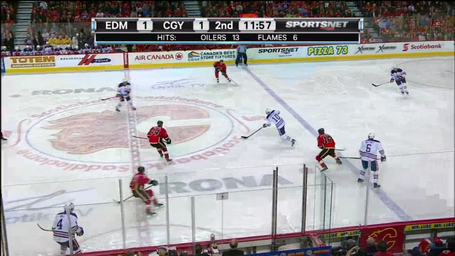 The final results are in the highlight below:

Shawn Horcoff's hard work, hustle and puck recovery in all zones (aided by Ryan Whitney's decision to pinch and stop the play) created an odd-man rush going the other way. Horcoff may not be an offensive dynamo, but he's an all-around excellent player, the kind of all-zones player necessary in a power-versus-power matchup, especially on a team bereft of such players.