When the Oilers came from the WHA, they were baptized into the glory of Lord Stanley. As each player looked up he saw the Holy Spirit coming down upon him in the form of champagne, and they heard a voice from heaven saying, "You are my team and I love you; with you I am always pleased."

After five such celebrations the Holy Spirit carried the team into the wilderness where they would reside for forty years, tempting fans yearly to abandon the love they had for their team. But God's angels were with them, helping them to endure.

When the Oilers played the Avalanche I mentioned that Calgary is in a very good spot relative to some of the other playoff contenders in the Western Conference because of their schedule. The Flames have a massive number of home games left! 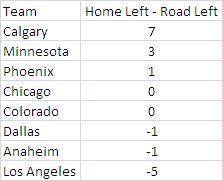 The only team close to them by that measure is Minnesota, and the Wild just aren't very good. Overall, the Flames aren't very good either. Their Fenwick percentage with the score close is 46.9%, which is actually worse than the Oilers (47.3%). But the Flames, like most teams, are much better at home than they are on the road. There, their Fenwick percentage with the score close is 53.1%, good enough for seventh in the NHL. With that in mind, it looks to me like the Flames (along with the Blackhawks) have a very good chance of making the playoffs, which leaves just one more spot for the other six clubs.