OKC Barons Quality of Competition and Other Treats

Share All sharing options for: OKC Barons Quality of Competition and Other Treats

The All-Star break marks the halfway point of the season in the AHL, and with every team taking several days off, it's as good a time as any to go through the AHL gamesheets to get a better idea of which of the Barons are scoring (and out-scoring their opponents) during five-on-five play, which players look like they're getting the most ice time, and which ones are being tasked with the tough assignments.

The methodology is pretty simple. I'll look at every scoring event that took place when both teams had five skaters on the ice. The scoring and +/- categories should be pretty intuitive, and we'll look at those first. After that, I'll look at quality of competition and teammates. To measure quality of competition, I identified all of the opposition forwards on the ice for every goal scored (both for and against) while a player was on the ice. The final number is the average points per game of the opposing forwards, so a quality of competition score of 0.50 would mean that opposing forwards scored, on average, 0.50 points per game during the 2011-12 AHL season. To measure quality of teammates, it's the same process but with forward teammates instead of opponents. This time around, I've also included each forward's three most common forward linemates.

The other measures are "events per game" and "individual points percentage". The former requires adding together all of the goal events at both ends of the ice (5v5 + and 5v5 - in the first table) and dividing the total by the number of games played. It's not a perfect proxy, but it does give us some idea about time on ice. The latter is a calculation of the number of times an individual player gets a point (either a goal or an assist) relative to the number of total goals scored while he's on the ice (EV+ in the first table). At the NHL level, league average for forwards is about 69.5% for five-on-five play, and a very talented player will sustain a percentage in the 75% to 80% range over the long haul.

First up, let's look at the forwards, followed by some notes: 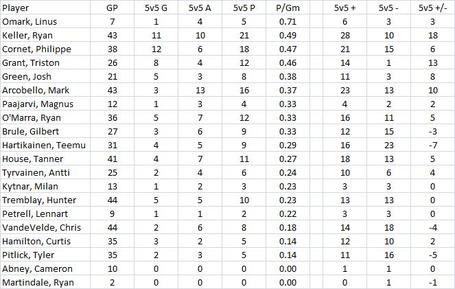 Next up, a quick look at the defense: 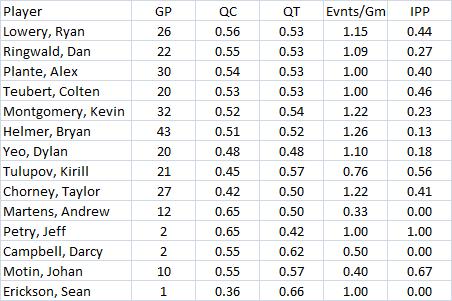