We cried out to you, O Yahweh,
we begged you for mercy saying,
"What is there to gain from our misery?
Are you trying to make us bitter?
If we refuse, will fans of any other team praise you?
Will they rise up to tell of your faithfulness?
Hear us, O Yahweh, and have mercy;
listen to our desperate pleas.
Turn our sarcasm into sincere thanks,

our gallows humor into real joy;
give us reason to sing your praises,
and we will never be silent!
O Yahweh, great God of Edmonton,
free us from incompetence and we will give you thanks forever!"

The Oilers last played the Avalanche on January 31st. Before that game, the Avalanche were 9th in the Western Conference, just one point back of Minnesota in 8th. But they lost to the Oilers, and then went 2-2-2 in their six next games. A couple of other teams banked a bunch of points over that same stretch (Phoenix and Calgary in particular), and now the Avalanche are down to 11th in the Conference, five points back of Los Angeles and Phoenix who are tied for 7th and 8th. Also working against them is the split of home and road games. Of the eight teams vying for three spots, the Avalanche rank near the bottom of the list: 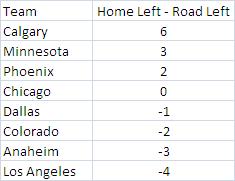 That certainly makes Calgary's bid for a playoff spot look pretty good (they're currently 9th), especially because the Flames have been so good at home (16-8-2), which only makes things tougher on the Avalanche.