Communication and Awareness... You're Doing it Wrong

Share All sharing options for: Communication and Awareness... You're Doing it Wrong

A common theme when analyzing what happens on the ice is that the Oilers, as a team, seem to be pretty terrible at a couple of aspects of hockey that are very easily correctable. With a couple of exceptions, the Oilers are pretty lousy at on ice communication. When talking about communication, I don’t just mean talking to each other (which is tough to gauge without being on the ice), but also physical clues, which are just as important. When the arena is loud, it can be hard to hear your defenceman when he says to switch off, or to pick up the man on the right, so you need to also use physical clues like hand and stick gestures. We’re not talking about complex signs like we're landing an aircraft, but rather simple gestures like pointing.

Another skill that seems to be missing on this team is awareness of their surroundings (aka vision). Too often the players have on horse blinders and don’t bother to look around and see who is around. Offensively speaking, the difference between being okay and being good is often the ability to sneak in a look here and there at what is happening around you. When you see Ryan Nugent-Hopkins make a seemingly blind backhand pass through traffic to a wide open player, you can rewind the play and see that a couple of seconds earlier he glanced up to see the player heading to that area. Defensively speaking, it’s an absolutely critical skill to have just to be an adequate player. The ability to take your eyes off the puck and look for the other outlets is often the difference in keeping the puck out of the net.

This goal was a comedy of errors for several players involved, and showed both poor communication and poor awareness.

Ales Hemsky picks up the puck along the boards and is surrounded by Senators. He focuses on the puck (never looking around) and never really sees the pressure coming from behind. Ladislav Smid is just standing at the blueline and never points or indicates to Hemsky that he's under pressure. 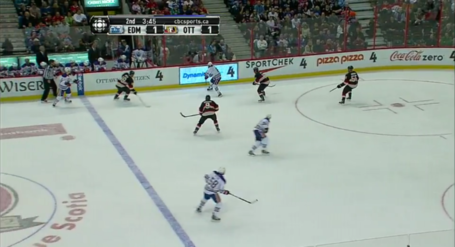 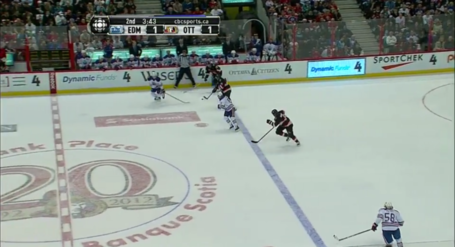 Hemsky heads back, looking at the puck the whole time and never turns around to see Michalek wide open. A glance over his shoulder at some point would have allowed Hemsky to see Michalek and covered him. Instead, he thinks he’s playing a 2 on 2 and turns to help Smid. 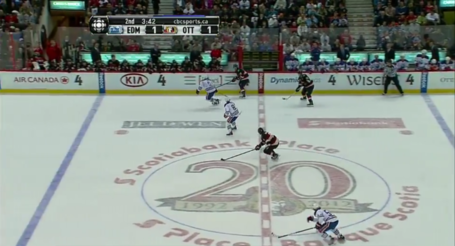 Even though communication and vision are separate entities, they are intertwined. When you communicate what you can see to your teammate, you can cut down what he has to scan for. This is especially important when defending on the rush when you have one player skating backwards and can view the play, while the other is chasing to stay in the play and trying to determine where to go.