Sam Gagner went from the Edmonton rail (as in run out of town on a) to Edmonton hero in 34 minutes. Before his unbelievable night against the Blackhawks, Gagner was the spare part, the also-ran, the center of rebuild v1.0 who was now too old, too small, and too musty to fit into the current plans. "Gagner for Schenn" was repeated so often that the mantra was the core to noted imaginarium owner Eklund's daily round-up. If it wasn't Schenn, Gagner was going to be the center of some package exchanged for a defenseman of some repute.

And then he got the softs treatment and the healthy parts of the chosen line. The results have been the hottest story in the league. But Gagner's success with good teammates should not surprise the media and fans who have closely watched all of the games of the last five years. Gagner centered the very successful Penner - Hemsky duo from 2009-2011 and the Hall-Eberle duo in 2010-11. But those results were glossed over as the media and fans suffered from BSOD (bright shiny object disorder).

What is humorous about Gagner's season, at least to those who find humor in the consistency of reactions to luck, is that his "breakout" season (according to the media) is the same season that Gagner finally found good fortune:

Will the media turn their back on him once his luck fails?

The horizontal axis shows qualcomp, specifically Corsi relative quality of competition taken from the venerable and terrifying Gabriel Desjardins' behindthenet.ca. The vertical axis shows percentage of faceoffs taken in the defensive zone, again from the venerable and terrifying one. The bubbles are color-coded: blue means the player in the bubble has a positive zonestart-adjusted Corsi, red a negative. Finally, the size of the bubble indicates absolute value zonestart-adjusted Corsi. 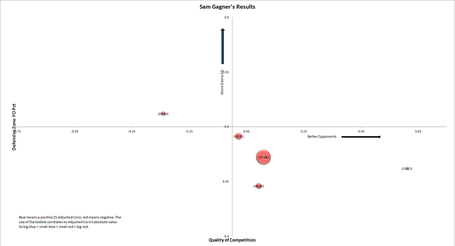 Take his chart above and his player card at Behind the Net and there's an interesting story. Gagner has posted a positive relative Corsi five years in a row, but that's been relative to the worst team in the league. Gagner's success with Hall and Eberle is in line with his history of posting excellent results with good linemates in each of his previous four seasons. As I said in that article:

Sort the table by "C". Note Gagner's percentages when he's on the ice with a pair of competent linemates. He might not be able to carry a line on his own, but he's certainly not holding back better players. His chance percentage when on the ice with Penner/Hall and Hemsky is better than that of Henrik Sedin's percentage against the Oilers over the last two seasons. His chance percentage with competent players is better than that of the league MVP against the worst team in the league. There's a real player there, he's just not capable of carrying a line on his own. Yet. He's only 22, give it time.

But when Gagner looks around the locker room, he's got to be confused. The chosen ones, moreso Eberle and Nugent-Hopkins, are receiving cherry opportunities, better than anything Gagner has ever been handed in his time in Edmonton. Gagner has worked as hard as any Oiler since the lockout, yet at the start of each season he's forced to play rickshaw for lower-tier players. And the favorable treatment isn't just at even strength. Gagner has never played the amount of power play time the chosen ones have been handed this year.

His two-way game is sound and getting better. He's never been afraid of traffic and is one of the few young Oilers willing to barge to the net and jam the puck home. He's one of the smartest players on the ice and uses it in all phases of the game. He's even improved on his greatest weakness:

There's a player under this five years of terrible development, and he's always been there. It's just taken a bit of the chosen treatment for the media and fans to recognize it.