But Schenn has struggled to make an impact this year and Leafs' writers think Jake Gardiner has surpassed Schenn on their prospects list. Is this a case of great expectations or a defensive defenseman struggling to find his way in the NHL, as they often do?

In a direct comparison, Gardiner is getting easier zonestarts and playing against weaker competition than Schenn, and has posted better results to this point. But what about progression? Is Schenn making any headway? A check of his player card at Behind the Net makes it seem unlikely.

The horizontal axis shows qualcomp, specifically Corsi relative quality of competition taken from the venerable and terrifying Gabriel Desjardins' behindthenet.ca. The vertical axis shows percentage of percentage of faceoffs taken in the defensive zone, again from the venerable and terrifying one. The bubbles are color-coded: blue means the player in the bubble has a positive zonestart-adjusted Corsi, red a negative. Finally, the size of the bubble indicates absolute value zonestart-adjusted Corsi. 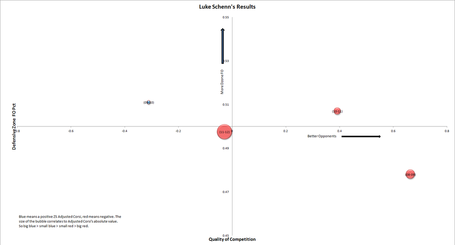