Share All sharing options for: Linus Omark - #7 in Copper and Blue's Top 25 Under 25

Linus Omark is in many some ways the opposite of Anton Lander. Whereas Lander is clearly in over his head in the NHL, Omark is clearly kicking out the jams in the AHL, and whereas Lander has yet to have a really great season in a professional league, Omark has had excellent seasons in the SEL, KHL, and AHL. The discrepancy in age makes this information a lot less damning of Lander than it could be - Omark is 24 while Lander is just 20 - but as of today, it seems clear to me that both guys are playing in the wrong league.

To drive the point home on Omark, we just need to look at what he's done so far this season at five-on-five in the AHL. Granted, it has only been nine games, but Omark has netted three goals and five assists to go with a +5 rating (+9 -4). Add in the two power play points, and Omark edges over a point per game. Yeah, that's a small sample size, but it's consistent with what Omark achieved last season when he was playing with the Barons (31 points in 28 games). It's clear that at the AHL level, Omark is a dominant player; it's time to let the man play in the NHL.

Unfortunately, Omark has had terrible luck this season in more ways than one. Tom Renney decided that Omark needed some game action, so the Oilers sent him to the AHL where he promptly got hurt. By the time he got back, the Oilers had gotten themselves relatively healthy after a season filled with injuries up front. It's that missed opportunity that has Bruce moving Omark down the list:

Superbly talented small forward seemed poised for a breakout season, but it turned into a breakdown season instead. After an early scoring drought Omark found himself in the pressbox, then in the minors, then on IR (courtesy of a bush league slewfoot in Rockford, IL, just to drive the point home; the KHL must seem pretty inviting right about now). As his ankle has s-l-o-w-l-y healed, Linus has missed one opportunity after another to fill a hole on the big club. Bad luck? Absolutely. But with all his arrows pointing down since last time we did this, I bumped him down a couple of notches. He will have a career somewhere, but it seems less likely now that it will be in Edmonton.

Fortunately (for Omark, not so much for Oiler fans), it looks like the trade deadline will bring another opportunity. Further, it looks to me like Omark should be able to capitalize. As Bruce mentioned, Omark had a scoring drought to start his NHL season (no points and just seven shots in five games), and his PDO of 95.7 last season (including a 6.9% on-ice shooting percentage) suggests that he's played in a lot of bad luck to start his NHL career.

The shot metrics, however, really liked him in 2010-11. His Relative Corsi was third-best on the team at five-on-five, and he led the team in shot differential per game in five-on-four situations too: 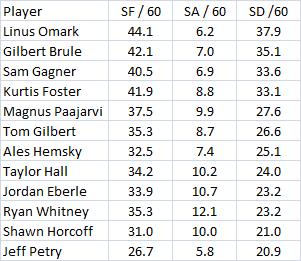 The extremely small sample for this year is the same. Omark leads all players who have been given at least 1.5 minutes of five-on-four time per game in five-on-four shot differential, which is important because that correlates well with future power play success. If Ales Hemsky gets traded, Omark is a natural fit to fill a top nine spot at evens, and quarterback the second unit power play. He'd also replace some of Hemsky's verve - there are very few players as entertaining to watch as Omark.

As for his early struggles with the percentages, they may end up being boon to the Oilers if both parties are willing to commit long term. Would Omark sign a deal that pays him between $1.5M and $2M per season for five or six seasons? I don't know, but if he is, it's the kind of risk that could have a huge payoff. I'd do it in a heartbeat.