Anton Lander was one of the most difficult players for me to place in this edition of the Top 25 Under 25. On the one hand, Lander is just 20 years old and has spent the entire season in the NHL after pretty much everyone had assumed that he was destined for a year in Oklahoma City. On the other hand, he definitely should have spent a year in Oklahoma City.

When Lander arrived in training camp this year, he was coming off a pretty mixed season captaining Timra of the Swedish Elite League. The team itself wasn't very good. They avoided relegation in the last game of the year and finished with a -25 goal differential, including a league-worst 165 goals allowed in 55 regular season games. Now, goaltending was a problem. The team used five different goaltenders during the year, and they posted a combined .900 save percentage, which was the second-worst total in the league (ahead of Sodertalje's .895). The club placed a much more respectable seventh (of twelve) in shots allowed. That makes it tough to know how much of Lander's team-worst -14 was his own shortcomings, and how much was bad goaltending behind him.

I tend to think that it must have been at least somewhat because of the latter because his coach just kept sending him out there. Lander led the team's forwards in ice time with 18:19 per game, a total that also placed him 18th overall among SEL forwards. That total was a slight increase on 17:51 per game that he'd earned in the previous season. So much responsibility at a young age is clearly a good thing, and his improved offense (from 16 points to 26 points or 1.10 points per sixty minutes to 1.76 points per sixty minutes) was also very encouraging. A year in the AHL would no doubt help to sort out whatever defensive shortcomings may have been causing that +/- and would help Lander to continue to develop offensively.

And then Lander made the Oilers. Lander is playing on the fourth line. Through fifty games, he's averaged just 10:49 per game. He has two goals and three assists for a total of five points. At even strength, he's scored 0.54 points per sixty minutes, the 19th worst total among forwards in the NHL. But it's not just the offense that isn't coming. By all of the possession metrics, Lander is getting creamed. His Relative Corsi (-10.3 per sixty minutes) and Raw Corsi (-15.5 per sixty minutes) are both sandwiched between Ben Eager and Darcy Hordichuk. His ZoneShift is also among the worst on the team: 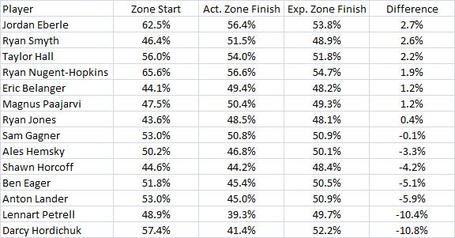 You'll note that Lander stinks but that he isn't quite at the deplorable level of Lennart Petrell and Darcy Hordichuk. Those would be two of the guys that the coach is throwing him out there with most often. For a guy that's overwhelmed already, linemates like that aren't going to help. Now, do I know the best way to develop hockey players? No, I don't. But when it comes to Anton Lander, I'm pretty confident that the Oilers are doing it wrong.