I genuinely believe that Erik Cole means everything he said in his tirade against the recent comments of Roman Hamrlik regarding the CBA Negotiations. That said, I don't see those views being reflected in the NHLPA's proposals during the CBA negotiations.

I respect Erik Cole as a hockey player. I really do. The guy came back from a devastating neck injury and has gone on to have a pretty good career for himself. His dedication to the game on a personal level is evident. That being said, I can't for one second believe the rant he went on yesterday in response to Roman Hamrlik's comments regarding Don Fehr and the NHL Lockout reflect the desires of the NHLPA as a whole. First, let's take a look at what Hamrlik said (credit to Dave Stubbs who wrote the Cole piece for supplying Hamrlik's translated comments):

We have to push Fehr to the wall to get the deal. Time is against us. We lost a quarter of the season, it is $425 million. Who will give it back to us? Mr. Fehr? There should be voting between players. Four questions – yes or no – then count it. If half of players say let’s play, then they should sign new CBA. If there is no season, he should leave and we will find someone new. Time is our enemy.

While I can understand Cole's displeasure for a member of the union breaking rank speaking out in opposition to the PA's public stance in the negotiations, it is the reasoning behind his outrage, (which assumedly is also his reasoning for supporting a hard-line bargaining tactics Fehr has applied thus far on behalf of the players) that strikes me as inconsistent with the union's demands.

Before getting into the specifics of outlining why I think Cole's comments aren't reflected in the actions of the PA, let me state for the record that I'm not a "pro-owners" guy (or a "pro-players" guy for that matter), right now, I am equally displeased with both sides for their short-sightedness and disregard of the fans (which is hardly unexpected) and I really would rather they all just shut-up until they had a deal.

Back on topic, Cole's supposed motives for backing the PA's stance in the CBA talks (fighting for the rights of future generations of NHLers) do not correlate with what the NHLPA is trying to achieve. I actually believe Cole's personal motives may be genuine, but even if they are, the PA is just as out-of-touch with his desires as they are with Hamrlik's.

To demonstrate, here is a quote from Cole taken from the same Stubbs story linked to above: (All bold emphasis added by me)

For him to come out and say this, it’s the most selfish thing I’ve heard during the lockout. Without a doubt. It’s just disappointing. You’d think the veteran guys are the guys who’d take more pride in what other veteran guys sacrificed in the last lockout, how we all benefited from that as a group. Some guys never played again. That’s … I don’t know, for me, and I’m not over 35 or anything, but being an older player, (expletive), I feel grateful to the guys who gave me the opportunity to earn what I’ve earned in this game. Out of that I feel a responsibility, not entitlement. Maybe that’s just the difference between Hamrlik and me.

Cole would go on to say later in the story:

As a veteran guy, especially him, he’s been around awhile… other veteran players have sacrificed their careers for the last CBA, missed out on a year, 240 guys never played another game... For me, I don’t look at this lockout and see what I’m not earning as the entitlement to, ‘Let’s get a deal done and let’s get playing.’

I see it as an opportunity to repay an opportunity that was given to me. That’s what this is supposed to be about, that’s what makes hockey players different. You sacrifice something for the people coming behind you. That’s where the respect factor comes in.

I think it is fair to say that the last paragraph probably crystalizes Cole's public comments most succinctly. That in his opinion, he is willing to sacrifice in the present for the good of future generations of NHL players. It's a noble thing to be willing to do, however, there's not really much evidence that the PA's objectives are in line with what Cole is stating here.

Take a quick look at what the NHLPA's stance has been throughout these negotiations. Without question, one of the biggest priorities has been keeping the players from taking a pay-cut from their current contracts. They have many justifiable reasons to want that, and I don't blame them, but if Cole is touting the virtues of those who were the elder statemen in the league in 2004/05 for their sacrifices, which included losing an entire season PLUS taking a 24% rollback in subsequent seasons (for existing contracts), it would be hard to say that this year's version of the PA is as willing to make present-day sacrifices for the good of future gains.

To further illustrate that point, let's look at the whole Hockey-Related Revenue ("HRR") discussion. It has been widely known for some time that the league was basically looking for a 50-50 split in revenues and wants to get there immediately. The players obviously have every right to refuse such an agreement, but it didn't take them long to capitulate to the idea of an eventual 50-50 revenue split.

For the last two months or so, the question has not been whether 50% was acceptable to the players, but how quickly they would allow their percentage of revenues to decrease from the current 57% down to 50/50. The PA has used terms like "Make-Whole Provisions" to articulate ways that they would like the league to contribute additional monies in order to slow the gradual descent to the equal split of revenues, and until their most-recent proposal, they had been steadfast in their demand that the new CBA contain a provision stating that the actual dollar amount spent on player contracts not decrease even a single dollar at the onset of the new CBA despite the 7% drop in the players' share of HRR.

What all of this says to me is that the PA is living in the moment and wants full value on current contracts even if it comes at the expense of future generations. The last CBA saw the players agree to a 54% share of HRR but had a clause to raise that number throughout the course of the CBA provided the league hit defined revenue growth targets. We have heard no discussions around a similar clause this time around.

For further evidence that the PA is all about the here and now, consider the league's demands for 50/50 as immediately as possible...if the PA's motives were actually in-line with those articulated by Erik Cole, then they could very easily have offered a steeper drop to 50-50 followed by a gradual increase over the life of the CBA, as was done in 2005 in order to ensure that by the time the next CBA concludes, the union would be in the more advantageous postion of negotiating from a starting point of 52 or 53% (as an example) rather than the 50% they appear destined for now. The added bonus to that model is that if the league's revenues continue to grow at a rate of 5-7% annually, in the later years of the CBA the players would be taking home an increasingly larger share of a pie that is much bigger to begin with. As demonstrated in the graphic below, this could mean upwards of $150 Million per season in additional spending on player contracts: 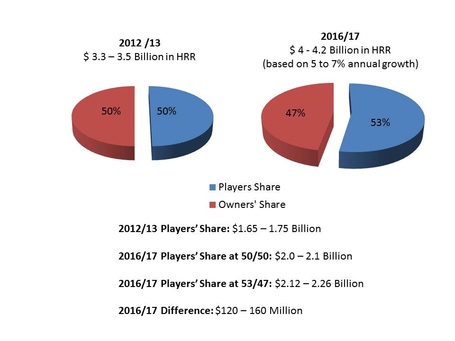 My point here isn't to try and solve the CBA, or to tell the NHLPA what their goals should be during this negotiation. To put it simply, all I'm trying to point out here is that Cole's claim that the Players' Association is fighting the good fight in the name of those players yet to reach the NHL is inconsistent with the proposals put forth by the union.