Which Oilers Forwards Are Getting The Best Teammates And Toughest Opponents?

Share All sharing options for: Which Oilers Forwards Are Getting The Best Teammates And Toughest Opponents? 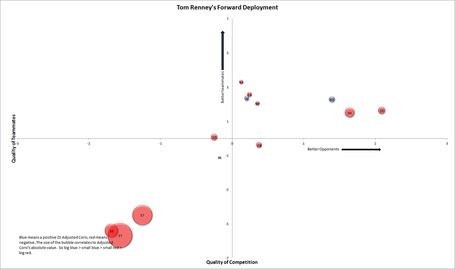 Get the full-sized chart here.

The horizontal axis shows qualcomp, specifically Corsi relative quality of competition taken from the venerable and terrifying Gabriel Desjardins' behindthenet.ca. The vertical axis shows qualteam, specifically Corsi relative quality of teammates taken from Desjardins. The bubbles are color-coded: blue means the player in the bubble has a positive zonestart-adjusted Corsi, red a negative. Finally, the size of the bubble indicates absolute value of zonestart-adjusted Corsi.