How Does Tom Renney Use His Forwards?

Share All sharing options for: How Does Tom Renney Use His Forwards? 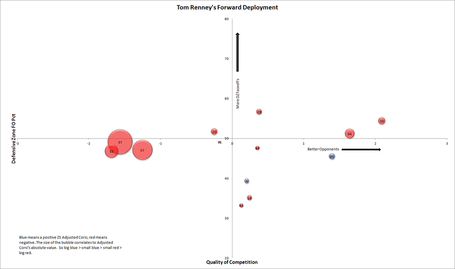 Get the full-sized chart here.

The horizontal axis shows qualcomp, specifically Corsi relative quality of competition taken from the venerable and terrifying Gabriel Desjardins' behindthenet.ca. The vertical axis shows percentage of percentage of faceoffs taken in the defensive zone, again from the venerable and terrifying one. The bubbles are color-coded: blue means the player in the bubble has a positive zonestart-adjusted Corsi, red a negative. Finally, the size of the bubble indicates absolute value of zonestart-adjusted Corsi.

Since I last checked in on this on November 15th, things have changed a bit:

Do not commit crimes on Broad Street Hockey's Watch - Broad Street Hockey
What's the point of posting this, you ask? Well, there's the hope that maybe somebody was there and can shed some light on the incident, perhaps with the ultimate goal of getting these idiots thrown in jail. Or, perhaps more unlikely, you can recognize a face or a voice or something in the grainy video and come forward.

Seriously guys, do not commit crimes on Broad Street Hockey's watch - Broad Street Hockey
We've passed this all on to the Philadelphia Police South Detective Division. They can sort it out. If you know anything else about the assault, you should probably give them a call or pass along a tip as well.

On Why Plus/Minus Is Stupid, Part 38 - Driving Play
Plus/Minus is often maligned by fancy stats types as not descriptive - it doesn't take into account the quality of competition or teammates. It doesn't acknowledge whether your team's goaltending is great, horrible, or somewhere in between. There's yet another reason why it's dumb - it describes game states that are not entirely relevant.

Hockey is just a slave to PDO - Arctic Ice Hockey
This is really intended as a cautionary tale - in both positive and negative directions. If your team is posting a 12% shooting percentage or a 1040 PDO through 10 or 20 or 30 games, you need to ask yourself if it's illusory, or if your team is the best team we've seen in half a decade.

The Fat Trap: Is that really what diets are? - Arctic Ice Hockey
I don't think we have a good handle on how people who drop from say 300 pounds to 150 do in the long run, but that's an extreme and atypical story - the average American male weighs 17 pounds more than he did in 1960, adjusting for changes in height, so most weight loss regimes are in the 20-30 pound range. You know we love data at this site, so let's look at Pope's citations:

"Fail For Nail" Projections - Battle of California
By this table's math, it looks like the Blue Jackets have the inside track on Yakupov, but it's certainly not in the bag. Let's not forget, Columbus started its season 0-7-1 but has played .387 hockey since. Anaheim started its season 4-1-0 and has played .273 hockey since (.286 in 14 games under Coach Kirby). If those latter win percentages keep up, the Ducks might end up in prime lottery position with as many as eight standings points to spare. Nail could easily be ours!

Tanner Pearson: 1st Round Pick? - The Scouting Report
The 19-year-old Kitchener, Ont. native was an effective player for the Barrie Colts a season ago, but 2011 has been nothing short of dominance. As of publication time, Pearson has racked up some pretty ridiculous numbers so far this season. 22 goals and 60 points is a good season for most, but Pearson has managed to tally these numbers in only 28 games this season. The Colts winger also has a 12-point lead in the OHL scoring race, and has notched at least 1 point in 26 of 28 games played.Keep in mind, Pearson has been passed over in two straight NHL Drafts.

40 Year Old Goalies - Brodeur is a Fraud
However, while I am confident that Tampa's team save percentage will continue to move upwards towards league average, I do not believe this will be because Roloson's numbers will get a whole lot better. It will instead occur as the team shifts more playing time to Garon, who started 11 games to Roloson's two during the month of December, or perhaps through bringing in another goaltender if GM Steve Yzerman decides to address his team's crease situation.

Bob Murray & The Ghosts of Seasons Past - Anaheim Calling
This got me thinking - is this Bob's desperate attempt to look like he knows what he's doing to save his job? Is he trying to calm the masses before they hit the panic button for him? Does he actually know what he's doing? I was taken back to a post Arthur wrote back almost a year ago about Murray's history and it is more relevant than ever. It leads me to believe that we are completely screwed, and I'm wondering if other Ducks fans feel the same. So, I decided to take the easy way out and re-run the post below.

How Rick DiPietro Retirement Rumors Roll - Lighthouse Hockey
Nonetheless, it's easy to see why anyone would run with these rumors: The Islanders' accumulation of goalies -- they've carried three pros all season! -- and DiPietro's own rehab trajectory have long hinted at this being the make-or-break season. Further, the pending expiration of the NHL CBA has long had people dreaming of special buyouts like in 2005. Last week the Post's year in review curiously noted his nameplate's absence from the locker room "as of Dec. 27."

Steve Who? - mc79hockey.com
It’s hard to look at this team and identify ways in which Tambellini has actively made it better, as opposed to passively accepting the blessings that the NHL forces upon the inept. He’s got a pretty long list of bad moves, including a troubling habit of acquiring guys who are defective. He’s made a lot of low percentage plays that have burned him, including Khabibulin, whatever he was trying to do with Sheldon Souray last year and Cam Barker. The Ben Eager contract looks asinine. He doesn’t really seem to be engaged in actively sifting through coal in the defenceman market.