How Do Defensemen Impact Ryan Nugent-Hopkins?

Share All sharing options for: How Do Defensemen Impact Ryan Nugent-Hopkins?

After a recent article comparing Ryan Nugent-Hopkins, Gabriel Landeskong and Sean Couturier, Woodguy made a comment speculating that the quality of defensemen playing behind these rookie forwards might be influencing their results. Here is elite recruiter Derek Zona's reply, which shows the ice time for defensemen playing with each of those three. Using my database, I looked at Nugent-Hopkins's numbers with each defenseman. The results were pretty interesting.

There was a very strong pattern, with RNH putting up decent numbers in front of the better defensemen and really struggling with the weaker ones. To measure this I use a different method for adjusting for zone starts than DZ does, which I've outlined here. Unfortunately, they're both called zone start adjusted Corsi (ZSAC), the most obvious name to give to a metric that adjusts Corsi for zone starts. Zero represents what a team of average players would get with the same type of ice time.

The Oilers haven't kept their pairings together too consistently, so I'm just putting the numbers up for each individual defenseman. Here are Ryan Nugent-Hopkins's ZSAC numbers with each defenseman:

Some of it is sample size, certainly we can ignore time with Alex Plante, but I was surprised by how much variation there is in these numbers. Eyeballing the names, the pattern is clear: with relatively good defensemen he put up decent possession numbers, right around and maybe even a little above league average. Then things drop off substantially and his stats are quite bad with the bottom-of-the-barrel guys.

Never one to be satisfied relying on intuition and name recognition, I took a closer look at the relationship between the skill of the blue liner, as measured in different ways, and Nugent-Hopkins's Corsi numbers. My first instinct was to look at the performance of the defensemen when RNH was off the ice. Here is the resulting WOWY plot. The horizontal axis is the defenseman's Corsi without RNH and the vertical axis his Corsi with RNH on the ice. In other words, the x axis shows how good the blue liner is and the y axis how well RNH did with playing in front of him. 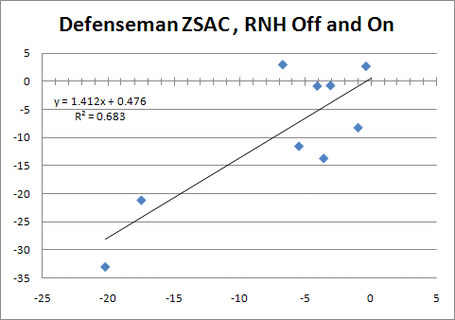 There should be a relationship, but this is stronger than I had expected. The equation, with the slope at 1.4, makes it seem that the defensemen quality impacts RNH's stats more than it does the average player. This again comes through looking at the names. There are four blue liners that have better stats with RNH on the ice than off - Smid, Petry, Potter and Gilbert. Whitney, Peckham, Sutton, Teubert, Barker and Plante have better numbers with Nugent-Hopkins on the bench.

Another way to look at it is to compare Nugent-Hopkins's Corsi stats to the ice time, with the idea that Renney should be giving better players more ice time. I ran it for both TOI/60 and total TOI for the season to date. The relationship between total TOI and RNH's numbers is much stronger, which I think reflects guys that have been struggling with injuries or form. 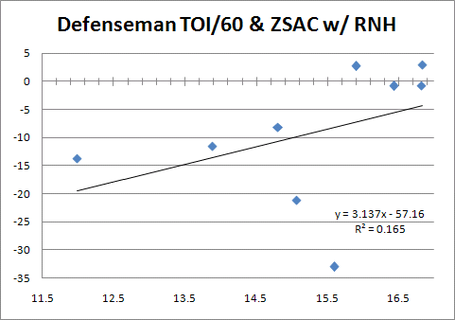 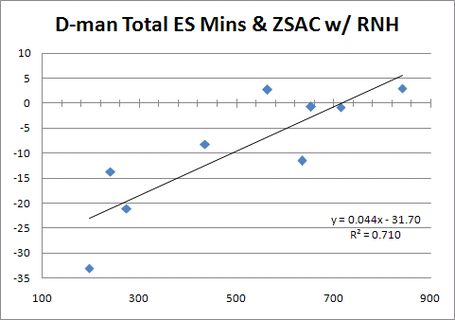 We'd like to see bigger samples and similar analysis for other rookies, but it looks like Woodguy may be on to something here. While we normally think about protecting a young forward's even-strength minutes by giving him a lot of offensive-zone starts and weak opposition, putting him in front of strong defensemen looks important as well, at least in this case. How crazy will Derek's five-dimensional graphs be?