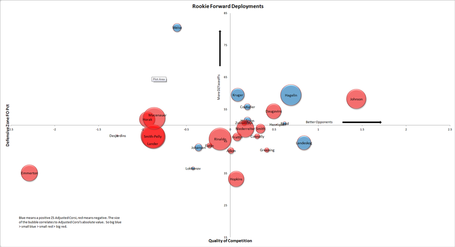 The horizontal axis shows qualcomp, specifically Corsi relative quality of competition taken from the venerable and terrifying Gabriel Desjardins' behindthenet.ca. The vertical axis shows percentage of percentage of faceoffs taken in the defensive zone, again from the venerable and terrifying one. The bubbles are color-coded: blue means the player in the bubble has a positive zonestart-adjusted Corsi, red a negative. Finally, the size of the bubble indicates absolute value for zonestart-adjusted Corsi. All of the caveats about comparing these numbers between teams stand, but the chart is still a useful jumping-off point for analysis and discussion.