Driving Play: Why the NHL Should Change Its Points System

Share All sharing options for: Driving Play: Why the NHL Should Change Its Points System

Author's note: I'd like to give thanks and praise to 2+2er atakdog, who really started this project. Much of my work is just his with different presentation

The new CBA opens up the opportunity to change the points system in the NHL. How does the current points system affect the way teams should play? Does it encourage cautious defensive play? Should it be changed?

These questions cannot be answered without comparing the current points system to something else. It seems like Bettman and the owners love having a skills competition shootouts break a tie and would not change to a system getting rid of them. If they're still going to give an OT/SO loser something, the simplest alternative system is 3-2-1-0 - three points for a regulation win, two for an OT/SO win, 1 for an OT/SO loss and nothing for losing in regulation. While there are fancier options such as 5-4-3-2-1-0 (regulation win - OT win - SO win - SO loss - OT loss - regulation loss) I think the 3-2-1-0 system is the only viable alternative, so I will compare that to the current setup.

As in my previous work looking at scoring effects, I rely on a simple model that uses backward induction and the average goals per game per team since the lockout to determine how likely each team is to win every minute of the game with any score when two average teams face each other. This assumes that there are no score effects, which might seem strange at first. Think of it as a baseline measuring how the points system affects the incentives to score and prevent goals when the opposition plays the same way no matter what. In other words, it tells you something about the system and ignores effects caused by the other team changing its play. To measure the incentive effects, I look at how scoring and preventing a goal impact the number of expected league points the team gets in both points systems.

When the score is tied. 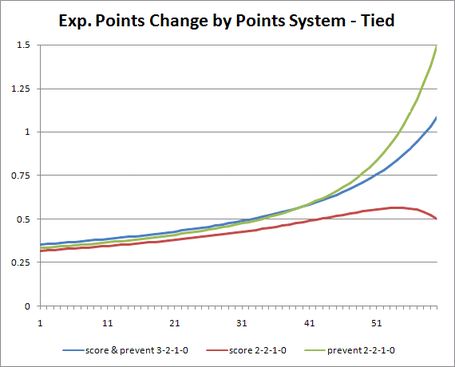 Unlike the current points system, 3-2-1-0 is what game theorists call zero sum (ok, technically fixed sum, which is equivalent). That means that no matter what happens, the same number of total points will be given to the two teams. This implies that whatever one team gains the other team loses. Therefore, the benefit to scoring and preventing goals is the same when the score is tied, at least with equal teams facing each other. You can see that this is not the case for the present 2-2-1-0 system. Notice how the green line, representing how important preventing a goal is (or you might say how costly giving up a goal is) shoots up toward the end of a tie game, while the red line, showing how beneficial scoring is, not only flattens but drops at the end, This raises the main criticism of the current points system - late in tied games both teams have little incentive to score and very strong incentive to keep the other team from scoring. In other words, both teams should be very cautious - giving up a goal is thrice as bad as scoring one yourself is good. The incentive problem is so extreme that the best team in the league (you choose but don't be wrong and say the Rangers) facing the worst team (Minnesota) would rather skip straight to overtime than play out the last 10 minutes.

A problem with that graph is that more points are given overall in the 3-2-1-0 system; three points are given in every game, not just every time two of your division rivals face each other. The best way to see how the incentive to push for a goal or shell up and play defensive hockey changes is to look at the ratio of the benefit of scoring to preventing a goal. The larger this is, the more important scoring a goal is compared to preventing the other team from doing so. If this is greater than one then scoring is more important, if it is less than one defensive play matters more. Here is a graph of those ratios for 3-2-1-0 and the current 2-2-1-0 points systems. 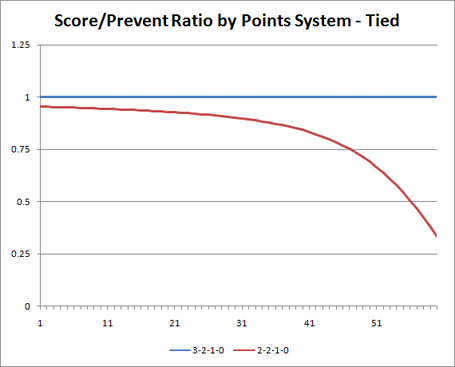 Under 3-2-1-0, the ratio is always 1 with the score tied for reasons mentioned above. You can see that no matter how much time is left, the current rules favor defense over scoring and this gets stronger as you get closer to the end of the game. In theory, if not in practice, this is pretty bad because it takes what should be the most exciting situation possible, the last few minutes of a tie game, and turns it into one where neither team has any reason to try to score.

Let's now turn to what happens when a team is ahead by a goal. Here the pattern is less clear cut: 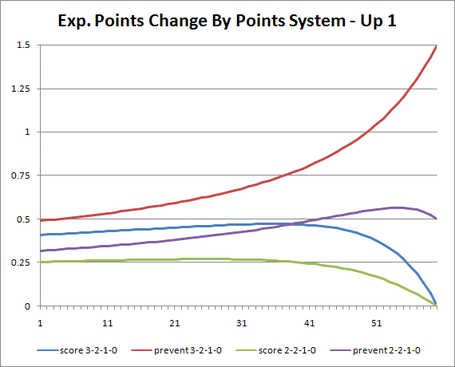 As you can see from the graph, keeping the other team from equalizing is more important if the points go 3-2-1-0 (the red line is above the purple one). This would be true even if I shifted the red line down to reflect more points per game being given. It comes down to the extra point the two teams get from ending regulation tied. Right now it's not that bad to blow a lead late - you still have about a 50% chance at losing absolutely nothing! In the hopefully-to-be proposed 3-2-1-0 system, you are guaranteed to lose at least one point and are about a coinflip to lose another. So that is an argument for the current system - teams that are up one late can afford to be a little more lax, maybe pressing up more to get the clinching goal which would open up the game.

There is a problem, however. Look at the blue and green lines, representing the value of doubling your lead in the 3-2-1-0 (anybody have a thesaurus with a 3-2-1-0 entry?) and current points systems, respectively. You can see that until the very last minute of the game, doubling your lead is much less beneficial under current rules. I think this again comes down to the extra point. Going up two drastically increases the chance of winning outright, no matter what they say. With the current system, winning outright isn't much better than going to OT/SO so scoring isn't as valuable.

To settle this, let's look at the ratios: 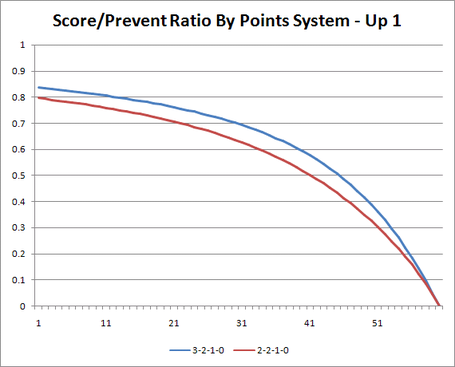 As you can see, scoring is more important compared to defending under 3-2-1-0 rules for the team that is up a goal. Like when the score is tied, though not to anywhere near the extent, when a team is up a goal the current points system encourages more defensive play than the obvious alternative.

When you are losing, the points system doesn't matter all that much - you absolutely must score and giving up a goal isn't such a big deal, particularly late in the game. The results here follow the same pattern but the two systems are much closer together. Here's the first chart: 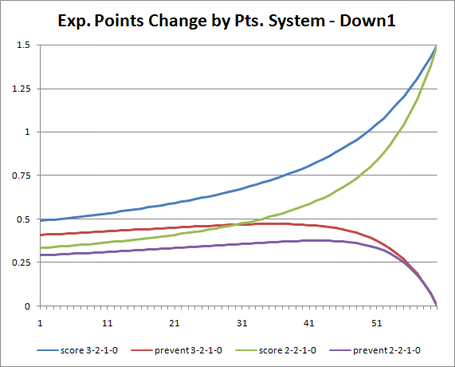 and the more important second: 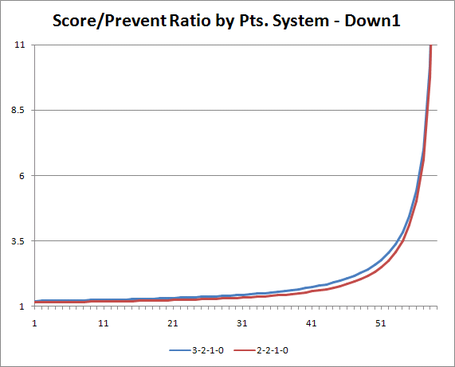 I'm perilously close to belabo(u)ring the point so I'll just say that I ran it for two-and-three-goal games and found the same pattern. I think it's safe to say that for every situation the current points system rewards cautious, defensive play compared to the alternative 3-2-1-0. If the league wants to open the game up, as it seems, then it should change the points system.

Does it matter in practice?

Do teams actually play as the graphs suggest? In the extreme they certainly don't. Say early in the season you are playing a team from the other conference and they dump the puck in and change with under a minute left and the score tied. Going by game theory, you should only attempt a breakout if your team is more than 3 times as likely to score as turn it over and get scored on. I'm not sure this is the case for any team up against any other team in the NHL, but with the possible exception of the Flyers facing a trap you'll see the breakout just about every time. We should be glad coaches aren't this nitty, otherwise the end of games would be quite boring, resembling the soccer game on The Simpsons.

In the next week or so I'll be looking for evidence for or against teams tightening up, especially late with the score tied. The problem with that is that there are other factors like players being tired and bad ice that could potentially increase scoring, so it's not 100% clear that such an effect would show up in the data. In such cases, theoretical exercises like what I've done here can be quite helpful.