Share All sharing options for: Clear Victory Standings at the All-Star Break

Earlier this season, I introduced the Clear Victory Standings, which appear on the right-hand sidebar of the blog. The concept is pretty simple. Because there's almost no correlation from season-to-season in a team's ability to win one-goal games, and because the official standings are such a mess thanks to the number of games that go into overtime, I find it helpful to look at how teams do in games decided by two or more (not including empty-net goals-for) to help suss out each team's true talent level.

Good teams do, of course, win their fair share of one-goal games, but those teams that win a disproportionate number of games by a single goal are often headed for a fall. After the jump, we'll take a brief look at how teams have done so far in games decided by two goals or more, and how each division has done against the others.

Before looking at the results, I should further clarify the empty-netter stuff. If a team wins 3-1 but got the third goal on an empty-netter, I don't consider that win a "Clear Victory". If they won 4-1 but got two empty-netters, it still doesn't count. If they won 3-2 but their opponents scored with the goalie pulled, it's still not good enough to make the cut.

First up, the standings for the Western Conference: 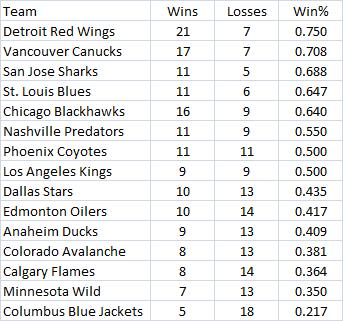 There are clearly five very good teams in the Western Conference. Unsurprisingly, all five have a worse record in one-goal games than they do in games decided by two or more. That's because they're very rarely totally outclassed on any given night (Detroit's recent 7-2 loss to Montreal notwithstanding). Interestingly, three of the top five all come from the Central division, which makes winning that division very important. The winner will get a relatively easy match-up in the first round of the playoffs, while the other two teams will (probably) be forced to play one another in what should be a great series to watch.

The teams that have gotten a lot of mileage from one-goal (and shoot-out) wins are Nashville, Dallas, Colorado, and Minnesota. The Oilers do surprisingly well in the Clear Victory standings (though note, still not all that well), but their record in one-goal games is an awful 8-17.

Next up is the Eastern Conference: 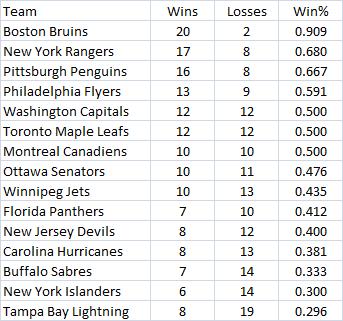 My goodness, are the Bruins ever an excellent team. They've lost by two or more just twice over the entire season, and in fact, their worst loss came on October, 18th against the Carolina Hurricanes: they lost 4-1. As with the West, three of the top teams play in the same division and it's thus likely that two of them will need to play one another in the first round. The Rangers have a pretty decent lead in that race right now, and it will be a huge advantage for them if they can maintain it. The Southeast stinks (as we'll see below), so it'll be interesting to see what happens if, at the end of the year, one of the teams in the Atlantic has a swing game that could see them finish fifth (with a win) or sixth (with a loss). They'd probably be better off losing, but good luck convincing the players.

The two teams racking up one-goal victories are the New Jersey Devils and the already-out-of-it Tampa Bay Lightning. If the Lightning really are worse than their record implies, the Oilers may yet be able to wriggle up the standings. On the other side of the coin, Montreal has an atrocious 9-20 record in one-goal games so far this season. With several teams on the edge of the playoffs in the East having significant deficiencies, the Canadiens may still be able to make a run for the playoffs if they can get back their early-season form at even strength. I wonder if Jacques Martin is available...

Finally, let's take a brief look at how each division looks (the results do not include any intra-division games):

As expected, the Central is cleaning house. What I didn't expect was the huge range from top to bottom. Teams in the Southeast, it seems, play a significantly easier schedule than the other teams in their Conference. It probably doesn't make a huge difference, but if, say, the Maple Leafs finish ninth and the Panthers finish eighth and the difference is just two or three standings points, strength of schedule may well account for the difference if these numbers are an accurate reflection of each division's talent level.