The final minute of a close hockey game often sees the trailing team pull their goalie for an extra attacker. As the defending team, you have to make sure that you make full use of every advantage you have.

The first advantage is the clock. They only have a limited amount of time left to score and every second they spend not scoring benefits the defending team.

The second advantage is desperation. The opposition is going to send players after the puck to prevent it from leaving the zone. Often times this is going to create areas in the zone that are going to be open, which will allow an opportunity to clear the puck.

The 3rd advantage is that even though you have 1 less player than the opposition, you still have 5. You now have an extra player to do the same things you’d normally do on the PK.

Tactically speaking, the 5th player makes a huge difference. The offense is trying to do the same things on a 6 on 5 as they do on a 5 on 4, which is to try and create smaller odd man situations to generate offense. The extra defender basically turns a potential 2 on 1 into a 3 on 2 or a 3 on 2 into a 4 on 3. Every increase is a benefit to the defending team.

In terms of positioning/formation, the box + 1 is my preferred deployment. The box + 1 is exactly how it sounds, you play your standard 4 man PK box with an extra player. From this deployment, you have the option to be as aggressive or conservative as you like (or as best fits the players you have).

The more aggressive approach is to send your +1 after the puck while the remaining 4 play a standard PK box. Typically this is just a rotation of one player attacking the puck and another covering his part of the box. So if the puck is in the bottom right corner, the RD pressures the puck and the C covers the RD box position and so on. 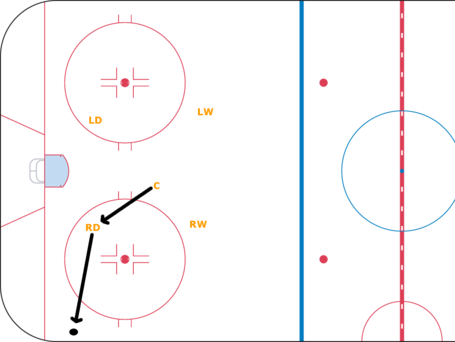 The more conservative approach is to block the passing lane into the slot with your +1. Instead of attacking the puck, the defensive player is going to stay within the confines of the box and protect the prime scoring area. For instance, if the puck is on the LW half-wall, the C will lineup between the LW and the LD, creating a line across. 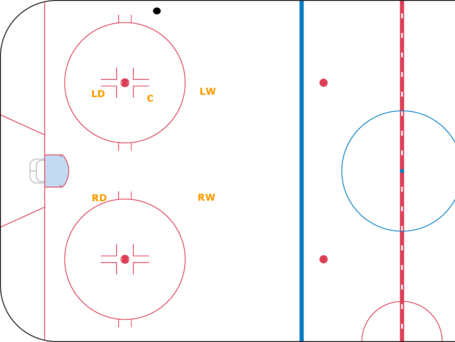 The more aggressive approach puts more pressure on the opposition, but could lead to a potential breakdown on a missed assignment or missed check. The more conservative approach makes breakdowns less frequent and harder to find holes, but it does allow the opposition to have more control and time with the puck to make a play.

With that being said, having the other team pull their goalie while you have the puck in the neutral zone and forcing them into a too many men penalty is ultimately the best 5 on 6 defence.