Checking in on the Barons

Share All sharing options for: Checking in on the Barons

When I last checked in on the Barons, they were sitting at 12-5-1 and at the top of the Western Conference, but there were significant concerns both on and off the ice. On the ice, their shot differential at that time was -4.8 per game and their PDO (in all situations) was 104.4, which gave me the impression that their record was unlikely to hold up over the long term. Since that time, several key players have either been injured or called to Edmonton to replace injured Oilers, which put the team under even more pressure. Off the ice, attendance had recovered from a very disappointing opening week, but remained near the bottom of the league. After the jump, we'll see how the Barons look now that we're halfway through the year.

On the ice, the Barons have a very similar record in the second segment of the season (12-6-4), but they've made an incredible turnaround on the shot-clock. Over that twenty-two game stretch, the Barons have generated 27.8 shots per game and allowed 25.2 for a shot differential of +2.6 per game, and now have a much more respectable -0.7 shot differential on the season (27.0 shots for and 27.7 shots against). Their record would actually be better if not for a huge dip in the percentages. In this twenty-two game segment, their shooting percentage in all situations (including empty-netters) is down to 9.2% and their save percentage is down to 91.0% for a much more reasonable PDO of 100.2. The season numbers are still on the high side (10.4 + 91.7 = 102.1), but it's good to know that they've been able to win consistently without that help, and with a defense that has, at times, been held together by chicken wire.

Off the ice, let's take a look at our three-game rolling average for attendance (so the first point is games 1-3, the second is games 2-4, and so on) comparing this season with last: 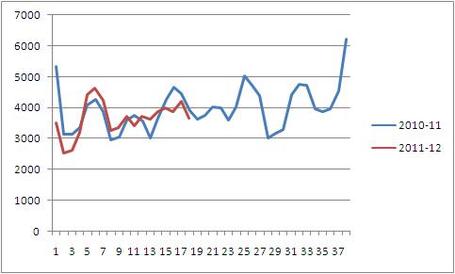 The disaster that was the opening week hasn't meant a complete disaster for the whole year, but the overall decline in attendance still has to be a concern. Through twenty games last season, the Barons averaged 3,963 fans per game compared to just 3,685 this year. If we throw out the home opener (which was poorly attended this season), the gap closes considerably (3,655 last year to 3,586 this year), but there's still a small decline. The team finished 22nd in attendance last year, and is down to 26th this year, despite having a team at or near the top of the league for the entire year. I can only hope that the Barons have a great run to and through the playoffs to bolster interest in the club going forward because if attendance stays at this level, AHL hockey in Oklahoma may not survive, especially since the agreement between the AHL team and the city includes a clause stipulating that "the agreement may be terminated if the average paid attendance per regular seaosn home game at the arena falls below 4,000."