Oilers Sleep Through 45 Minutes, Manage To Get A Point

Share All sharing options for: Oilers Sleep Through 45 Minutes, Manage To Get A Point

The Devils made a rare visit to Rexall Place tonight to take on the Oilers. How rare you ask? Well as it turns out this is only the Devils third visit to Edmonton since December 30, 2001. That's three games played here in the last nine seasons if you don't feel like doing the math yourself. But even though a visit from the Devils is a rare treat, if games like this are what can be expected then perhaps it's good that the NHL's realingment plan is on hold for now because this game was downright boring.

Both teams slept walked through the first ten minutes of the game and things got only marginally better from there through the second period until the Oilers finally woke up five minutes into the third period. Neither team generated much in terms of scoring chances or shots and the game dragged on nearly putting this fan to sleep, and based on the non existent noise level in Rexall Place a few other fans as well. If not for a great night from the Oilers newest top line of Hall, Gagner, and Hemsky this game would have been entirely unwatchable. 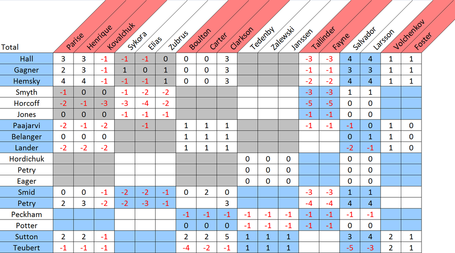 The first period was about as boring as 20 minutes of hockey can get with the teams combining for a total of 13 shots and five scoring chances. In fact the first thing worth actually talking about didn't even happen until the midway point of the period when Taylor Hall blocked a Mark Fayne slap shot and was able to grab the puck as it bounced behind Fayne allowing him a breakaway opportunity against Johan Hedberg who made a good save to keep the game tied at zero.

In the second period the Oilers had a chance to take the lead when they were awarded consecutive powerplays, the first a tripping call on Zach Parise followed by a David Clarkson interference penalty 37 seconds after the game had returned to five-on-five play. But despite the man advantage opportunities the Oilers were unable to generate any scoring chances or even a shot on goal during the two powerplays; the Oilers wouldn't even record their first shot on goal of the second period until more than 11 minutes of hockey had been played. As if the anaemic powerplay and offense wasn't bad enough, Ilya Kovalchuk would give the Devils the lead when he scored a shorthanded goal with 10 seconds left in the second Oilers powerplay.

The Oilers would finish the second period/start the third period on another powerplay which was more successful in that it wasn't completely ineffective and shots on goal were actually registered, although the end result was the same, no goal. Finally after 45 minutes the Oielrs came to life when The Taylor Hall - Sam Gagner - Ales Hemsky line pinned the Devils in their own end, resulting in a number of good scoring chances on the shift. The Devils eventually were forced to ice the puck just to relieve the pressure. A Patrik Elias tripping penalty would give the Oilers their fifth powerplay of the night with 8:23 left to play. This time the Oilers would convert with the man advantage when Hemsky's slap shot got through a Ryan Smyth screen tying the game at one.

In the final minute of the game Corey Potter got called for tripping. I haven't seen a good replay of what happened but the replay shown at the game made it look like he slew-footed Adam Larsson in front of the Devils net. A stupid penalty with only 36 seconds left to play seemed like just what the Devils would need for a late game winner but the Oilers would manage to kill those 36 seconds forcing the game to overtime, securing a point in the process. But killing off the remaining time in a four-on-three situation proved to be too much for the Oilers penalty killers and Parise knocked home the game winner just over a minute into extra time. Final score: Devils 2 - Oilers 1.